In the above Fernando Tatis Jr hitting mechanics video, we’re going to discuss: 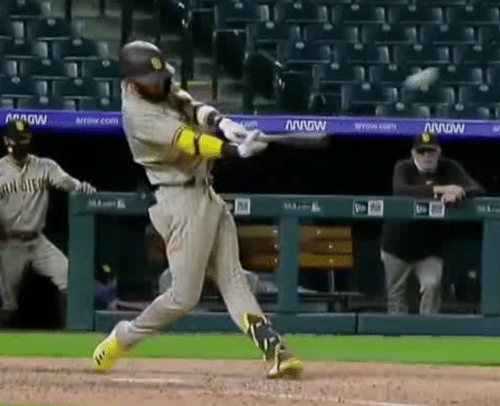 The following is the Fernando Tatis Jr. hitting mechanics video transcription.  After you enjoy this analysis, then check out Part-2 Here.

0:05
Hey, what’s going on? It’s Joey Myers from the Hitting Performance Lab, and in this Fernando Tatis Jr. hitting mechanics video, we’re going to go over a couple things.

0:13
First, we’re going to start with a couple fan graph points of interest, and then we’re going to go over how Fernando Tatis Jr. uses Catapult Loading System principles. And lastly, we’re going to touch on how he stays sideways using his lower half.

0:30
A couple things worth noting in the fan-graphs article, as you can see that he is 6’3″, 185 pounds. I may be wrong but that’s about what Ted Williams was coming into the league. You could see comparing his 2019 and 2020 seasons, obviously 2020 is going to be quite shortened and 60 games season.

0:53
You can see that with almost half of the amount at-bats, plates appearances. He’s got almost as many doubles, and almost as many homers as he did in 2019, where he played in 84 games. And then you can see in his line drive, ground-ball, fly-ball rates that again, this is about half the amount of games in 2019, he played in, and then he’s got about half or so that he’s played in 2020.

1:24
You can see that, of course, these numbers, the data is going to be a little skewed because there’s lower data points, but you have a 22.4% line drive rate league average is 20. Got 16.3 here this year, ground-ball percentage is about average last year 46.6%, or 43% is average. So he’s a little bit above average. A little bit even more above average of 48.2 this year, and then his fly-ball rate has gone up from last year. He’s at 38, or 30.9%, which league average tends to be, league averages about 34%.

1:58
And then he’s almost about average on his fly ball percentage but increasing about 5% from last year to this year. Again, we’re talking lower data points.

2:07
Alright, let’s really dig into this Fernando Tatis Jr. hitting mechanics video, we’re going to look at the Catapult Loading System principles. The best view for these, for most of them, is from the pitchers view. Just to give a little context to this pitch, you can see the location is about up and in, up and in part of the strike zone. And the pitch, you can’t see it on the screen. I can’t see it on the screen, but it’s flashing a nine, here. So it’s 90 plus for sure. 92. There you go 92 miles an hour.

2:34
And now let’s check out and one of the big principles is showing numbers or what we call neck pressure, creating neck pressure where the head becomes an anchor point anchors in a tracking position. That front shoulder scap protraction for those kinetic nerds out there, is coming underneath the front chin, shoulder’s sliding under the chin, head is holding it’s anchored tracking position.

3:01
And you’re going to see Fernando Tatis Jr. in these hitting mechanics, you can see him show his numbers on his back because of what that front shoulder is doing moving underneath to pass the chin.

3:14
The other thing he’s doing the other big one is the scap pinch. Some of you might know it as a scap row. You can see the back elbow will peek out behind him. Again the head is at an anchor point and he is doing like a rowing motion with that back arm and scap, and you’ll see that back elbow peek out from a pitchers view. Does a very good job.

3:41
We also call this like wringing the towel out, so the head is the top one and the neck, and the shoulders are at the bottom and we’re wringing the towel out. The head anchors in a tracking position and the shoulders rolling beneath and their limitation… They’re limited by how much the head allows them, front shoulder allows the front shoulder to come in, and then it’s also about the back shoulder retracting the scapula retracting back. It’s all limited by the head in the tracking position.

4:09
The other big principle of the three big Catapult Loading System rules is a downhill shoulder angle. Now Fernando Tatis Jr. in his hitting mechanics, he doesn’t really get a really high back elbow, you see some hitters like trout will do to angle those shoulders down. He actually keeps his back elbow about the height of his back shoulder.

4:50
So we want to close the alligator on the front side, so we angle the shoulder slightly down again, slightly down between 6 to 10 degrees down and that goes for both fast-pitch softball and baseball slightly down. If you do it too much, you’re going to end up with a big fat uppercut, slightly down, and then we turn from there. Okay, those are the big three of the Catapult Loading System principles.

Staying Sideways with the Back Foot…

5:13
Let’s touch on, see how he stays sideways with that back foot. In baseball and softball, we’re dealing with 90 degrees of fair territory. So we have to manage our bodies effectively within that 90 degrees.

5:29
To do that we can’t over rotate our lower half rotation is okay, at the lower back but not too much. 7 to 12 degrees of rotation is what the lower back the lower lumbar is allowed. Seven to 12 degrees of rotation. The bones in the lumbar aren’t made to rotate, they’re only made to flex and extend. You can check it out, research it. They aren’t made to rotate. The rotation that you see is from the muscles surrounding the bones.

6:33
We call this at Hitting Performance Lab, shifting foot pressure. So what generally happens is we’ll see foot pressure on the outside of the back foot, at this point at the stride, all the way to the touchdown, inside of the front foot.

7:07
Simple move sideways. You can practice this in your bedroom just shifting back and forth like a dance, shifting your footwork back and forth. Each foot sideways is going to be opposite of the other, where the foot pressure is. So as the swing starts, you’re going to see foot pressure outside. Again, back foot. It’s going to shift to the inside of the back foot outside of the front foot. You’re going to see him stay inside, see the back heel, you might see it get close to vertical but you’re never going to see it pop over towards the plate.

7:40
And then you’ll see him actually shift it even farther backwards behind him where we say trying to line up this back butt cheek with the back heel, see the outside of the front foot foot pressure, see it go from inside, to outside, and then the back foot… we’re going from outside to inside. And then as he’s swinging here, you’re going to see that back he’ll push even farther behind him.

8:26
But you can see that shifting foot pressure beautiful for keeping the hitter effectively between the 90 degrees of the field. Alright, remember in this Fernando Tatis Jr hitting mechanics video we talked about:

9:09
Make sure that we’re swinging smarter by moving better. And before I let you go…

I read your book the other day. I have only been using some of your Facebook posts to help my daughter with her swing, without understanding… END_OF_DOCUMENT_TOKEN_TO_BE_REPLACED

I am a Physical Therapist your stuff in body movements is awesome. I went to some FMS courses and Gray Cook spoke highly of you.  Your appr… END_OF_DOCUMENT_TOKEN_TO_BE_REPLACED

I like what you bring to the hitting world. You speak of things that are not normal hitting talks. The way the body works. I coach 12u Softb… END_OF_DOCUMENT_TOKEN_TO_BE_REPLACED

Hey Joey.  I just wanted to let you know how Brayden did this spring for baseball.  For little league Brayden batted over .800.  He also … END_OF_DOCUMENT_TOKEN_TO_BE_REPLACED

Hey bud…Jayden had his best batting practice ever last night.  Hit at least 9 balls around 300-feet or farther.  I’m so happy with his progr… END_OF_DOCUMENT_TOKEN_TO_BE_REPLACED

Screw those coaches. I didn’t believe the time frame of the catapult system. My son at 10 (90 lbs) is highly coach-able. I taught him the sy… END_OF_DOCUMENT_TOKEN_TO_BE_REPLACED

I read the first edition of The Catapult Loading System a couple years ago. The only reason I did is because I have a Kindle Unlimited membe… END_OF_DOCUMENT_TOKEN_TO_BE_REPLACED

I purchased this book last winter not only to teach myself but also my 5 year old son. I also purchased a Zepp’s Swing Tracker at the same t… END_OF_DOCUMENT_TOKEN_TO_BE_REPLACED

I’ve gotten the oldest 3 “professional” instruction with their swing mechanics and approach with mixed results. Often times, Id have to spen… END_OF_DOCUMENT_TOKEN_TO_BE_REPLACED