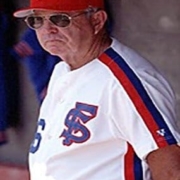 I’ve been doing research on an upcoming project called The Science Of Sticky Coaching.  I did an interview with legendary Coach Bob Bennett (my coach at Fresno State from 2000-2002), and Thomari-Story Harden (founder of Team Avenue Travel Baseball, and an 8-year Los Angeles Dodger Pro), and just thought I’d share it with you.

Sorry, the interview audio may not be the best because we did it in a semi-noisy restaurant over lunch…

Here’s a rundown of the questions I asked Thomari and Coach Bennett: 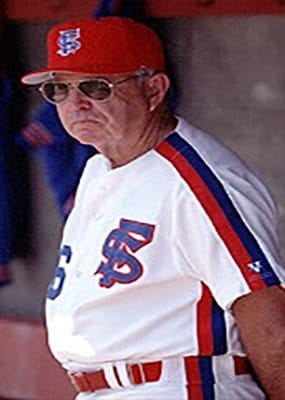 This interview really cuts to the core of what baseball and softball coaches should be focusing their time on in practice.  Taking notes is a MUST!

“Bennett took a break from Bullard in 1967 to coach Fresno State when Pete Beiden took a sabbatical; the team went 38-10. When Beiden retired after 1969, Bennett became head coach, a job he held until his retirement in 2002. He would go 1,302-759-4 to finish 7th in NCAA Division history in career victories; he only had two losing seasons in his career. He won 14 Conference Coach of the Year honors and was named NCAA Coach of the Year in 1988 by The Sporting News.

Bob coached for Team USA in 1977 and 1979 and managed the team in the 1983 Intercontinental Cup (when they won a Silver Medal) and 1986 Amateur World Series.

Bennett retired with a 1,302-759-4 win-loss record. #26 was the first number ever retired by Fresno State. He was once president of the American Baseball Coaches Association as well. He was inducted into the ABCA Hall of Fame and College Baseball Hall of Fame (2010).”

Hey bud…Jayden had his best batting practice ever last night.  Hit at least 9 balls around 300-feet or farther.  I’m so happy with his progr… END_OF_DOCUMENT_TOKEN_TO_BE_REPLACED

Wow, I didn’t realize how researched this material actually was. I’m blown away how these simple movement patterns have been researched. I j… END_OF_DOCUMENT_TOKEN_TO_BE_REPLACED

“Hi Joey, got the course and watched it all the way through early this morning.  Played in a game (+55 adult 12 inch slow pitch) around no… END_OF_DOCUMENT_TOKEN_TO_BE_REPLACED

Let me just say thank you. This book explains things that seemed unexplainable in the past. You just had to get it. Great stuff. I was a big… END_OF_DOCUMENT_TOKEN_TO_BE_REPLACED

Actually works and teaches the coach on how to teach hitting to younger kids. Ever get frustrated while explaining hitting to a little leagu… END_OF_DOCUMENT_TOKEN_TO_BE_REPLACED

I have read this book. A couple times to make sure I understand the science. It has changed my daughter’s life. Literally. She was always a… END_OF_DOCUMENT_TOKEN_TO_BE_REPLACED

I read your book the other day. I have only been using some of your Facebook posts to help my daughter with her swing, without understanding… END_OF_DOCUMENT_TOKEN_TO_BE_REPLACED

“Hi Coach, I’ve bought two copies (CLS book), one for me and one for my grandson’s coach. I also have three of your online programs.  Des… END_OF_DOCUMENT_TOKEN_TO_BE_REPLACED

“I bought into this two years ago and bought the book. I coach Fastpitch travel softball. From top to bottom of our batting order pitchers h… END_OF_DOCUMENT_TOKEN_TO_BE_REPLACED