You are here: Home1 / un-weighting principal 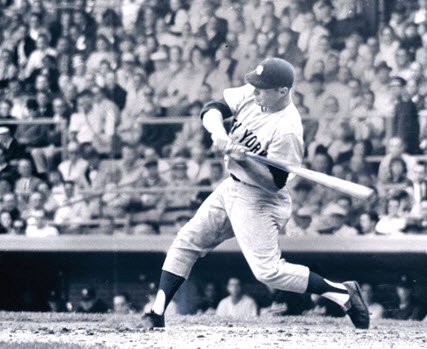 I originally included this Mickey Mantle video in a Swing Smarter Baseball Hitting Drills post on June 11th, 2013. I did this about 6-months before launching HPL.

The basic premise of the video was to compare Mickey Mantle’s right handed swing mechanics to Czech javelin thrower, Jan Železný’s throwing technique.  Jan is a world and Olympic champion and world record holder. He also holds the top five javelin performances of all time…according to Wikipedia.

In the video, I brought up my favorite Ralph Waldo Emerson quote many of you have seen me post before:

“As to the methods there may be a million and then some, but principles are few.  The man who grasps principles can successfully select his own methods. The man who tries methods, ignoring principles, is sure to have trouble.“

The human movement “principles” we’re comparing in the video are:

The reason I picked “The Mick”, is because he wasn’t really a big guy, according to Baseball Reference.com, he stood at only 5’11, 195-pounds.

Don’t get me wrong, Mickey Mantle was a naturally strong dude.  But he wasn’t the size of today’s behemoths:

And, some of The Mick’s dingers have been the talk of folklore, claiming to have traveled over 600-feet!

Although with the computation of Metrics now, as Christopher Harbour, a YouTube reader commenter on this particular video, put it:

“The farthest official home run in MLB history was hit by Babe Ruth in Detroit at a distance of 585ft. Mickey’s longest shot was 510Ft. It was often claimed to be much farther but that distance was the distance AFTER the ball rolled. This info is proven by SABR historian Bill Jenkinson.”

Whatever the case, it’s still amazing that a guy of Mickey Mantle’s stature, can hit a ball over 500-feet!  We don’t see Giancarlo, Miggy, or Trout doing that.

And by the way, everyone thinks Babe Ruth was this hulking mass of a guy…he was only 6’2″, 215-pounds.  And according to the above comment, launched the longest dinger 585-feet!

So what was Mickey Mantle doing mechanically making him so special that we as coaches should be teaching our younger hitters?

Mickey Mantle on the Un-Weighting Principle (or Forward Momentum) 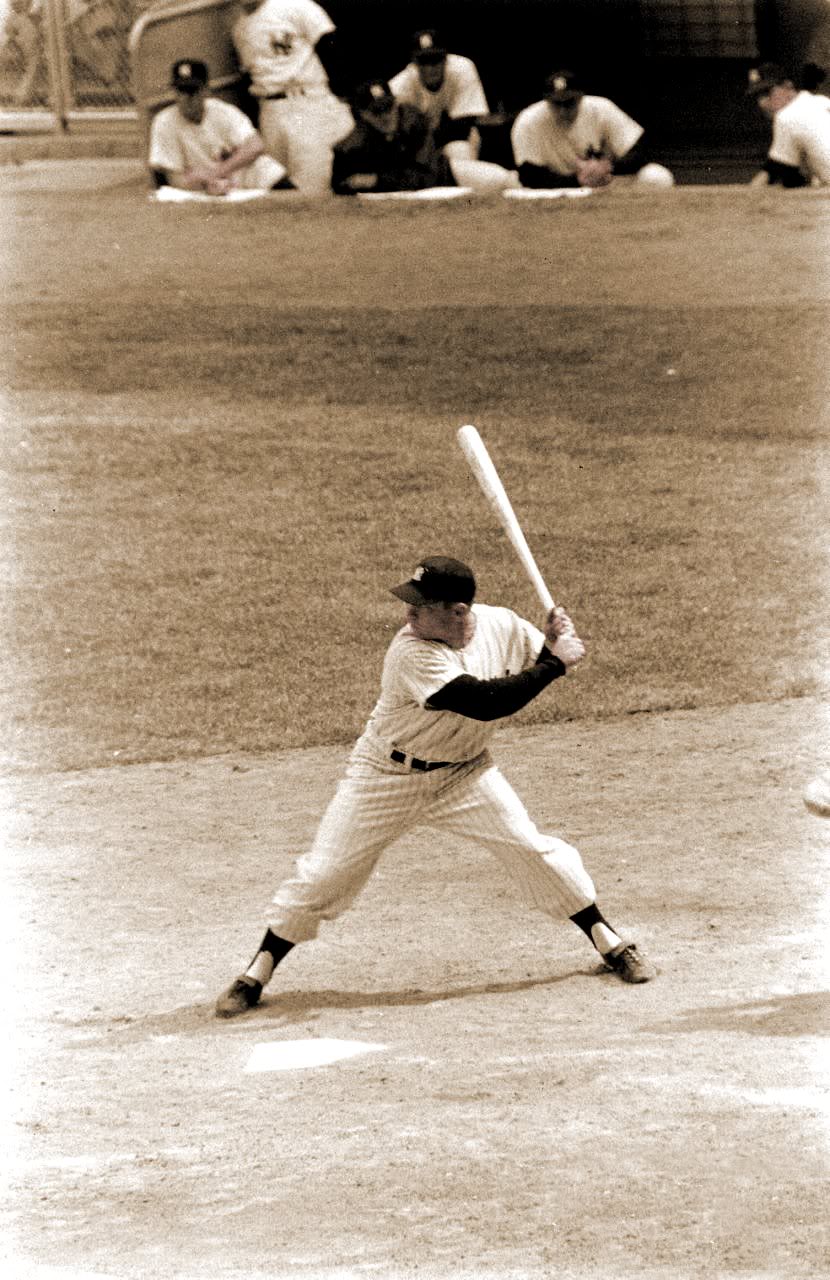 I said in the video that The Mick’s back knee wasn’t floating over his ankle, but that’s simply not true.  This was knowledge residue from past baseball experts I was listening to at the time.

What Mickey Mantle did really well was shifting his foot pressure.

We can see from the moment he lifts his stride foot to that foot touching down that his foot pressure looks like this:

This is similar to a story one of my readers, Stephen Reid, shared about prolific golfer Ben Hogan (5’9″, 145-pounds), saying in an email:

“A friend of mine worked at Shady Oaks in Dallas where Hogan played and practiced. Towards the end of Mr. Hogan’s time of ‘grinding it out of the dirt”, he was allowed the opportunity to sit and watch him hit balls. He said that Mr. Hogan started talking about the stance, and he stated that the way he thought it would come to pass in the future would be that both feet at address would both be turned slightly towards the target- 30 to 45 degrees. By turning the right foot in at address, the golfer would essentially be putting a governor on his/her right side.

Mickey Mantle is also most certainly picking up his stride foot and leading with his hip forward.  Just pick out a point of reference in the background, and track how far his hip moves forward.  He’s effectively ‘un-weighting’ his bat, or getting a “head start”, to make the transfer of linear momentum into angular (or rotational) easier.

And we can clearly see the Javelin Thrower, Jan Železný, using forward momentum sprinting down the track before slinging his “arrow” A LONG WAY.

by Thomas Myers.  Watch the following FunctionalPatterns YouTube video of Thomas Myers talking about the concept of Tensegrity, or Tension Integrity:

It’s the idea that there are compression and tension forces acting within the body at all times.  In the Mickey Mantle video, I talk about imagining a big ‘X’ on his chest and back…connecting one shoulder to the opposite hip.  The fascial lines are a little more complicated than this, but let’s take a general look at how this works…

When Mickey Mantle pre-loads his torso – before turning – we see his lead shoulder come down and in towards his back hip (one leg of the ‘X’ shortens), while the rear shoulder and front hip move away from each other (other leg of the ‘X’ lengthens).  And the reverse is true on the backside.

This is evidenced by tracking his LEFT shoulder:

CLICK HERE for an interesting article titled “Muscle Power Golf?!…NOT!” by Kelvin Miyahira (big thanks to Stephen Lowe for the link).  It talks about how the swing – whether we’re talking baseball/softball or golf – IS NOT about activating fast twitch muscle fibers, but engaging the springy fascia.  It’s a rant that I wish I did FIRST!!

Any other Mickey Mantle stories, facts, or book recommendations on him?  Please share in the comments below… (THANKS in advance!!)

Thank you so much for your help through your book T.C.L.S. I am 13 and weigh around 105 and I finally hit my first home-run! (The field I wa… END_OF_DOCUMENT_TOKEN_TO_BE_REPLACED

Thank you Coach! Your stuff is great! My son got his first home run 2 weeks after reading your book. Keeps getting more and more distance no… END_OF_DOCUMENT_TOKEN_TO_BE_REPLACED

Hey bud…Jayden had his best batting practice ever last night.  Hit at least 9 balls around 300-feet or farther.  I’m so happy with his progr… END_OF_DOCUMENT_TOKEN_TO_BE_REPLACED

Actually works and teaches the coach on how to teach hitting to younger kids. Ever get frustrated while explaining hitting to a little leagu… END_OF_DOCUMENT_TOKEN_TO_BE_REPLACED

I’ve gotten the oldest 3 “professional” instruction with their swing mechanics and approach with mixed results. Often times, Id have to spen… END_OF_DOCUMENT_TOKEN_TO_BE_REPLACED

I am a Physical Therapist your stuff in body movements is awesome. I went to some FMS courses and Gray Cook spoke highly of you.  Your appr… END_OF_DOCUMENT_TOKEN_TO_BE_REPLACED

I like what you bring to the hitting world. You speak of things that are not normal hitting talks. The way the body works. I coach 12u Softb… END_OF_DOCUMENT_TOKEN_TO_BE_REPLACED

Wow, I didn’t realize how researched this material actually was. I’m blown away how these simple movement patterns have been researched. I j… END_OF_DOCUMENT_TOKEN_TO_BE_REPLACED