You are here: Home1 / adrian gonzalez

Question: How does ‘Showing Numbers' to the Pitcher Effect Bat Speed at Impact versus ‘NOT Showing' them?

Since we're REVISITING two previous swing experiments on ‘Showing Numbers' versus NOT, here are the original posts and data to get you up to speed:

In 2016 ‘Show Numbers' swing experiment, this was what the averaged out Zepp data looked like:

In 2014 ‘Show Numbers' swing experiment, this was what the averaged out Zepp data looked like:

For those versed in Anatomy, for explosive movement on the Transverse Plane (twisting), there must be a protraction of the front scapula (‘showing numbers'), and a retraction of the back Scapula (what's often referred to as ‘Scap Row').  Scap Rowing by itself doesn't engage full range of springy fascia.

Based on the above research, I'm expecting to see a dramatic bump in Bat Speed at Impact, Hand Speed Max, and possibly a reduction in Time To Impact.  I think Attack Angle and Bat Vertical Angle at Impact will remain unchanged. 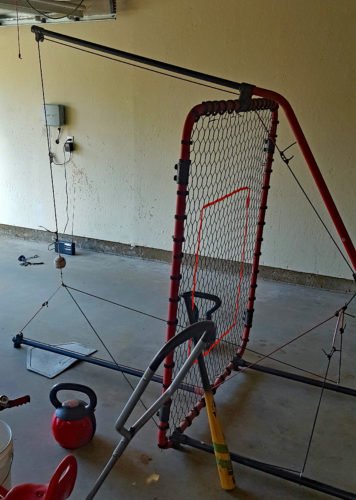 This is the SwingAway Bryce Harper model hitting station used for the ‘Showing Numbers' experiment. 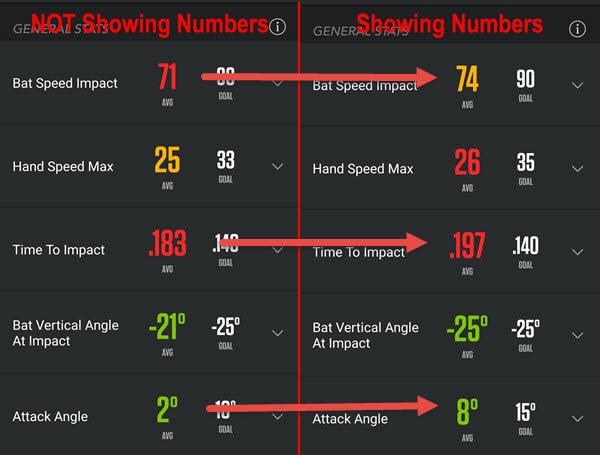 The drop from previous ‘Showing Numbers' swing experiments was surprising, in addition to a small 1-mph drop in Hand Speed Max.  There was also a slight increase in Time To Impact.  The interesting numbers were the ones that indicate Launch Angles, both Bat Vertical Angle at Impact and Attack Angle.  We hadn't experienced such a dramatic uptick in those in past experiments.

What Can Bryce Harper Learn From Mike Trout? 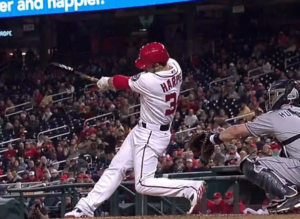 This article explains why Mike Trout will repeatedly out-slug Bryce Harper mechanically, unless Bam-Bam adds efficiency to his swing.

I picked this match-up because they have one year separating their experience in the Big Leagues, they're similar physically, but Mike Trout slugs almost 100 points higher!  According to Baseball-Reference.com:

In this video, we'll compare Mike Trout, and look at how Bryce Harper DOES NOT:

Mechanical Disadvantage #1: DOES NOT Get a “Head Start” Using Gravity 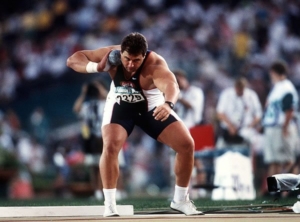 Bryce Harper starts from a dead stop.  We know stop and go traffic burns fuel quicker than freeway driving.  Because it's inefficient.  A “head start” is how we get more efficient during a swing.  Think about receiving the baton in a 4X100 meter relay race.  Throwing a 16-pound Shot Put over 70 feet.  Or hitting a golf over 500 yards.

Effective hitters use Gravitational Forces to get their swing started and spice up their Final Turn.  Mike Trout does this.  Consider this Un-Weighting Principal test…

Imagine standing tall holding a forty-pound dumbbell in your hand hanging by your side.  Now lift the weight up in front of your face.  What muscles did you feel working?  Shoulder?  You're right!

Now, get back to your standing position.  Take a medium step forward and when your foot hits the ground, start to lift the dumbbell in front of your face.   What muscles did you feel working?  Would it be easier to lift that 40-pound dumbbell with the first or second scenario? 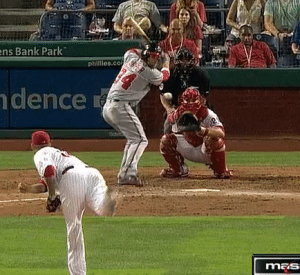 Our body loads using springy fascial tissue.  According to Thomas Myers in his book Anatomy Trains

In comparing Adrian Gonzalez, Bryce Harper has an explosive swing, but in reality doesn't engage his body's own natural springy material as much as A-Gon. 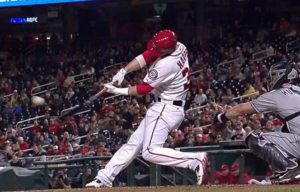 Dr. Kelly Starrett of MobilityWOD.com talks about this quite a bit.  He's referring to the head and spine position during dynamic movement.  There are two types of vertebrae bending or flexing:

In an efficient swing, number one is BAD, and number two is GOOD.  Why?  CLICK HERE and watch the next four minutes of this YouTube video (3:13-7:13) of Dr. Kelly Starrett demonstrating the One-Joint Rule.  He doesn't include flexing the head sideways (ear to shoulder).  But you'd get the same ineffective force producing result as taking the chin to the chest.

As the above picture clearly shows, Bryce Harper actually goes ear to shoulder at and through contact.  Unless something changes mechanically, “Bam-Bam” will continue to trail Mike Trout in repeatable power.  However, with his body type, these changes can BOOST Harper into the 35+ homer per year category.

UPDATE: I wrote this article in 2014.  Bryce Harper has made one big change to his mechanics…in this video, Darryl Hamilton points out some interesting points (not all I agree with):

I don't agree with Darryl Hamilton that Bryce Harper is minimizing his Forward Momentum from 2014 to 2015, I think it's the same.  Although, I do agree Harper is more “squatted” when he starts.

I think the biggest change is with his back foot NOT coming off the ground as much, or traveling as far forward as it was in 2014.  This has allowed Harper to stay on the plane of the pitch longer with his barrel, and therefore hit more dingers in 2015.

However, I still don't like how Bryce Harper breaks the ‘One-Joint' Rule.  He's still leaving repeatable power on the table…and that's scary to think after his 2015 offensive output 😛 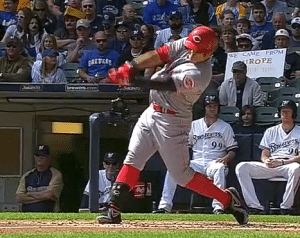 We're talking about the Conservation of Angular Momentum.  Take Olympic ice skater Adelina Sotnikova, who won gold in the 2014 Winter Olympics for instance.  Here's how she increases her rotational speed: 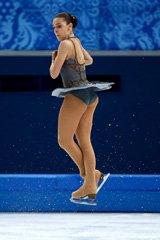 Moment of Inertia (or MOI) just means a body's tendency to resist angular (rotating) acceleration.  Rotating speed and the moment of inertia have an inverse relationship.

Let's apply the answer of “when to bend” to hitting…in hitting a pitched ball, we don't know what: 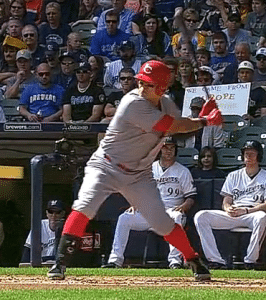 A hitter's post-impact objective, MUST be to get both arms extended.  This would ensure proper transition of Centripetal (center-seeking) v. Centrifugal (center-fleeing) Forces.

Here are a couple spine engine mechanics we could work on at home that would give us a repeatable power advantage at the plate (and what Shin Soo Choo isn't doing).  Before the stride foot touches down, we need to:

Fixing this can take Shin Soo Choo's 162-game average of 19 homers to over 30 for sure.  Basically, it makes his swing more adjustable to higher perceived velocities, if we're talking about Perry Husband's EV system. 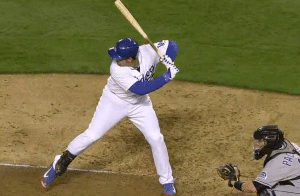 We'll use Adrian Gonzalez's swing to talk about:

Contrary to popular belief, “walking away from the hands” is NOT how we load properly.  It decreases turning speed by arm barring.  In the 2014 Sochi Winter Olympics, if controversial gold medal winning ice skater Adelina Sotnikova could turn faster by barring an arm out, then don't you think you'd see her do that? 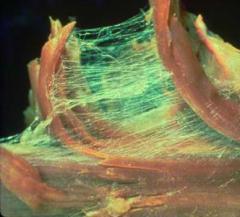 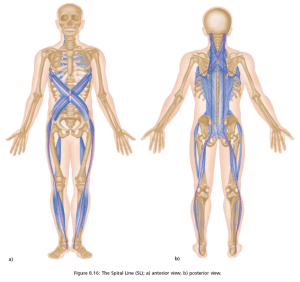 I call this the ‘Springy X Pattern'.  Imagine an ‘X' on the front and back of the torso.  When one leg of the ‘X' shortens, then the other stretches.  Golf training expert Jason Glass of Jason Glass Performance calls these Rotational Power Slings.

Adrian Gonzalez “spring loads” his swing using what I call the Catapult Loading System (CLS).  It takes the Stability ‘X' Pattern or Rotational Power Sling concepts and applies them to hitting.

Here are a few other world-class spring loaded athletes who's movements are very similar to a hitter's:

CLICK HERE in case you missed Part-1 to the Hitting Backwards: 4 Common Mistakes Hitter's Make video series.  And CLICK HERE for Common Mistake #3, where we look into why a friction-free hitter SHOULD NOT land with the front toe closed…

I have read this book. A couple times to make sure I understand the science. It has changed my daughter’s life. Literally. She was always a… END_OF_DOCUMENT_TOKEN_TO_BE_REPLACED

Screw those coaches. I didn’t believe the time frame of the catapult system. My son at 10 (90 lbs) is highly coach-able. I taught him the sy… END_OF_DOCUMENT_TOKEN_TO_BE_REPLACED

Thank you Coach! Your stuff is great! My son got his first home run 2 weeks after reading your book. Keeps getting more and more distance no… END_OF_DOCUMENT_TOKEN_TO_BE_REPLACED

Wow, I didn’t realize how researched this material actually was. I’m blown away how these simple movement patterns have been researched. I j… END_OF_DOCUMENT_TOKEN_TO_BE_REPLACED

I read the first edition of The Catapult Loading System a couple years ago. The only reason I did is because I have a Kindle Unlimited membe… END_OF_DOCUMENT_TOKEN_TO_BE_REPLACED

I like what you bring to the hitting world. You speak of things that are not normal hitting talks. The way the body works. I coach 12u Softb… END_OF_DOCUMENT_TOKEN_TO_BE_REPLACED

I am a Physical Therapist your stuff in body movements is awesome. I went to some FMS courses and Gray Cook spoke highly of you.  Your appr… END_OF_DOCUMENT_TOKEN_TO_BE_REPLACED

I’ve gotten the oldest 3 “professional” instruction with their swing mechanics and approach with mixed results. Often times, Id have to spen… END_OF_DOCUMENT_TOKEN_TO_BE_REPLACED

“Hi Coach, I’ve bought two copies (CLS book), one for me and one for my grandson’s coach. I also have three of your online programs.  Des… END_OF_DOCUMENT_TOKEN_TO_BE_REPLACED