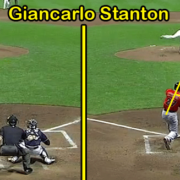 It may be how you’re using it… 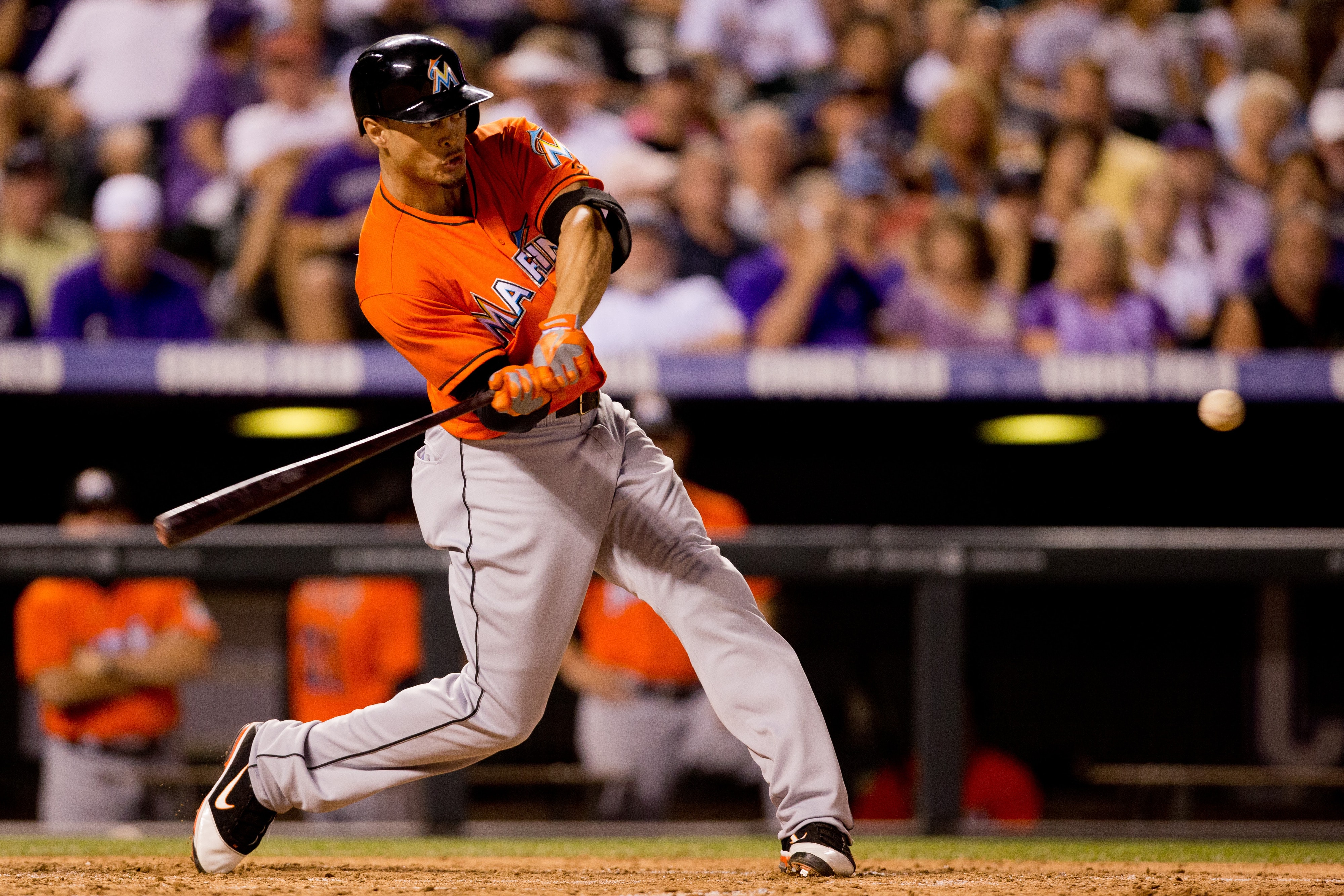 “Ken Griffey Jr’s swing doesn’t display any handicap to the optimization of his angular momentum. His lead shoulder is pulled back leaving his hands quite close to his body.”

This viewer is referring to an early arm bar.  This is okay in golf, because they’re hitting a stationary object and not worried about timing.  Not okay in baseball and softball…
The preceding viewer doesn’t know how to manipulate the Conservation of Angular Momentum (think spinning ice skater) to time an unknown moving pitch and hit it consistently hard.  They’re mistaking the forest for the trees.
In this video post, we’ll look at:

This is the video analysis software I use from Powerchalk.com

I used to be “that guy” who poured over slow motion swing footage using state of the art video analysis software.  Slow motion analysis of hitters has become a peeing contest in hitting forums.  You know the type…they’ve studied the video…they’ve worked with [fill in the blank name] professional hitter(s)…they coached 30+ years at a high level.

These “paper tiger” credentials don’t mean a thing to me now (and they shouldn’t to you, regardless of your experience in the game)…

I’ve been in corrective fitness for 10 years, and see a never-ending pattern of inefficient and flawed hitting mechanics.  FOUR reasons why today’s hitters – YES, even the professional ones – are inefficient with their swings:

So who has the upper hand in today’s hitting forums, when it comes to video analysis software use?  The person who understands human movement rules.  One has to understand “the rules” first.  As a result, this will cut slow motion video analysis time in half!  This is seeing the forest before the trees.

Here’s an example of what I mean…

What Do a Bucket, Hanging Object, and Hitter’s Front Arm have in Common?

Giancarlo Stanton from the pitcher’s view…90-degree front elbow to spine at start and impact. Photo courtesy of MLB.com

We’re going to science for optimal placement of the front upper arm to set the plane of the pitch early, before the Final Turn.  Here’s an email response I sent to one of my hitting friends, Bob Hall from Canada, about this very topic:

“Imagine a bucket with a large lip.  Punch a hole in the lip and tie a string with a rock attached to the string at the bottom.  Now, the level of the bucket lip is the shoulder angle.  If you tip the bucket towards where the rock and string are attached, the rock will continue pointing “down”, and the space between the bucket and string will widen.”

Before the Final Turn, the efficient hitter will utilize a downhill shoulder angle (tipping the lip of the bucket).  The elbow will continue to point down because of Gravity (the rock hanging from the lip), causing the light gap under the front armpit to widen.  If the hitter artificially points the elbow up or down from this natural position, then muscles will activate making the hitter’s chances of getting on pitch-plane inefficient.

The 90-Degrees from the Spine Rule 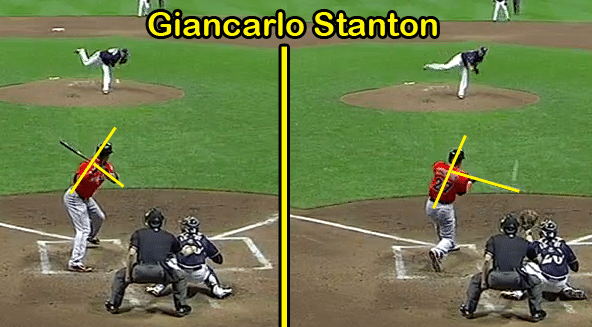 One of my readers, Kyle Harrington, posted this comment on the blog recently:

“One principle is that the bat only really accelerates efficiently when it is on a single plane. The only way to get maximum acceleration of the barrel is to have the swing path at 90 degrees to the spine angle. The only way to do this is to have the lead arm high and also 90 degrees to the spine. If the hands are too high or too low when both these other conditions are met, then the swing will be off plane.”

Using Powerchalk’s motion analysis software, we can see this pretty consistently with top hitters like Giancarlo Stanton.  We can adjust to pitch height by bending at the waist, but the barrel should follow the 90-degree from the spine rule.

So, using motion analysis is good, but should take a “back seat” to understanding scientifically proven human movement rules. 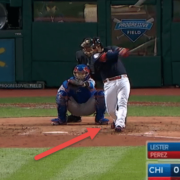 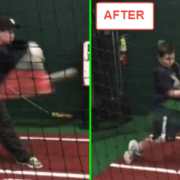 Softball Hitting Tips For Beginners: How To Turn NO Improvement Into Outstanding Results
12 replies

I read your book the other day. I have only been using some of your Facebook posts to help my daughter with her swing, without understanding… END_OF_DOCUMENT_TOKEN_TO_BE_REPLACED

I am a Physical Therapist your stuff in body movements is awesome. I went to some FMS courses and Gray Cook spoke highly of you.  Your appr… END_OF_DOCUMENT_TOKEN_TO_BE_REPLACED

I like what you bring to the hitting world. You speak of things that are not normal hitting talks. The way the body works. I coach 12u Softb… END_OF_DOCUMENT_TOKEN_TO_BE_REPLACED

Screw those coaches. I didn’t believe the time frame of the catapult system. My son at 10 (90 lbs) is highly coach-able. I taught him the sy… END_OF_DOCUMENT_TOKEN_TO_BE_REPLACED

“Hi Coach, I’ve bought two copies (CLS book), one for me and one for my grandson’s coach. I also have three of your online programs.  Des… END_OF_DOCUMENT_TOKEN_TO_BE_REPLACED

Actually works and teaches the coach on how to teach hitting to younger kids. Ever get frustrated while explaining hitting to a little leagu… END_OF_DOCUMENT_TOKEN_TO_BE_REPLACED

“I bought into this two years ago and bought the book. I coach Fastpitch travel softball. From top to bottom of our batting order pitchers h… END_OF_DOCUMENT_TOKEN_TO_BE_REPLACED

Hey bud…Jayden had his best batting practice ever last night.  Hit at least 9 balls around 300-feet or farther.  I’m so happy with his progr… END_OF_DOCUMENT_TOKEN_TO_BE_REPLACED

I purchased this book last winter not only to teach myself but also my 5 year old son. I also purchased a Zepp’s Swing Tracker at the same t… END_OF_DOCUMENT_TOKEN_TO_BE_REPLACED

Baseball Quotes: The Work Ethic Derek Jeter Is Talking About
Scroll to top