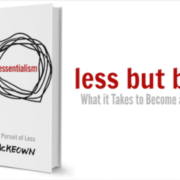 Is There A Point At Which Doing Less (But Thinking More) Will Actually Produce Better Outcomes? 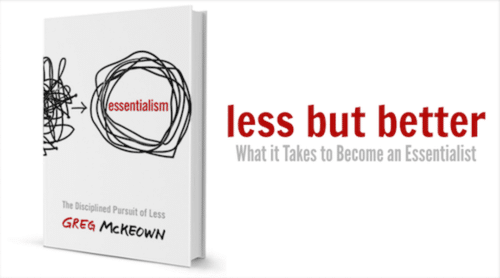 “Give me six hours to chop down a tree and I will spend the first four sharpening the axe.” – Abraham Lincoln

Coach Bill Masullo sent me an email this week tapping into his network of coaches to answer the following question (btw, I did a couple interviews with him here AND here)…

“I had a young coach ask me a question, regarding player commitment during the season…my question is how do you influence or address player motivation?“

The following content draws from quotes in the book: Essentialism: The Disciplined Pursuit of Less

, by Greg McKeown.  I highly recommend reading or listening to it.

So much so, that Tony Robbins highlighted their importance saying something to the effect of…“The quality of your life originates from the quality of questions you ask.”

I think coaches, instructors, parents, AND athletes lose a sense of their biggest priorities in life, and is the #1 reason I've decided to take the majority of my hitting business online, rather than run a brick-and-mortar facility.

Please note, below you'll find the word “Question” in bold, so you can skip to them.  Yes, I know the essence of some questions below seem similar, but sometimes the same question asked in a different way turns the light bulb “on”.  Enjoy!

*This is a great strategy, and one I wanted to include here.  It's less philosophy, and more application.  My wife and I do something similar with our kids using a “sticker” system.  They earn stickers for doing certain things (productive age appropriate things), and can spend them on getting a toy (within financial reason) after earning 10 of them.  This works fantastically well for motivating young humans…

As Abraham Lincoln once said, “Give me six hours to chop down a tree and I will spend the first four sharpening the axe.”  This was a man who understood priorities.  Do you?

Actually works and teaches the coach on how to teach hitting to younger kids. Ever get frustrated while explaining hitting to a little leagu… END_OF_DOCUMENT_TOKEN_TO_BE_REPLACED

Hey bud…Jayden had his best batting practice ever last night.  Hit at least 9 balls around 300-feet or farther.  I’m so happy with his progr… END_OF_DOCUMENT_TOKEN_TO_BE_REPLACED

Screw those coaches. I didn’t believe the time frame of the catapult system. My son at 10 (90 lbs) is highly coach-able. I taught him the sy… END_OF_DOCUMENT_TOKEN_TO_BE_REPLACED

I use the system to teach my son and he is 4’11 67 pound 10 year old. Meaning he is super skinny and very tall. He hit one in tryouts yester… END_OF_DOCUMENT_TOKEN_TO_BE_REPLACED

“I bought into this two years ago and bought the book. I coach Fastpitch travel softball. From top to bottom of our batting order pitchers h… END_OF_DOCUMENT_TOKEN_TO_BE_REPLACED

Thank you so much for your help through your book T.C.L.S. I am 13 and weigh around 105 and I finally hit my first home-run! (The field I wa… END_OF_DOCUMENT_TOKEN_TO_BE_REPLACED

I’ve gotten the oldest 3 “professional” instruction with their swing mechanics and approach with mixed results. Often times, Id have to spen… END_OF_DOCUMENT_TOKEN_TO_BE_REPLACED

Thank you Coach! Your stuff is great! My son got his first home run 2 weeks after reading your book. Keeps getting more and more distance no… END_OF_DOCUMENT_TOKEN_TO_BE_REPLACED

At Last, The Secret To Decreasing Strikeouts Is Revealed