You are here: Home1 / big sluggers

Like Jose Altuve, You Can Compete With BIG Sluggers… 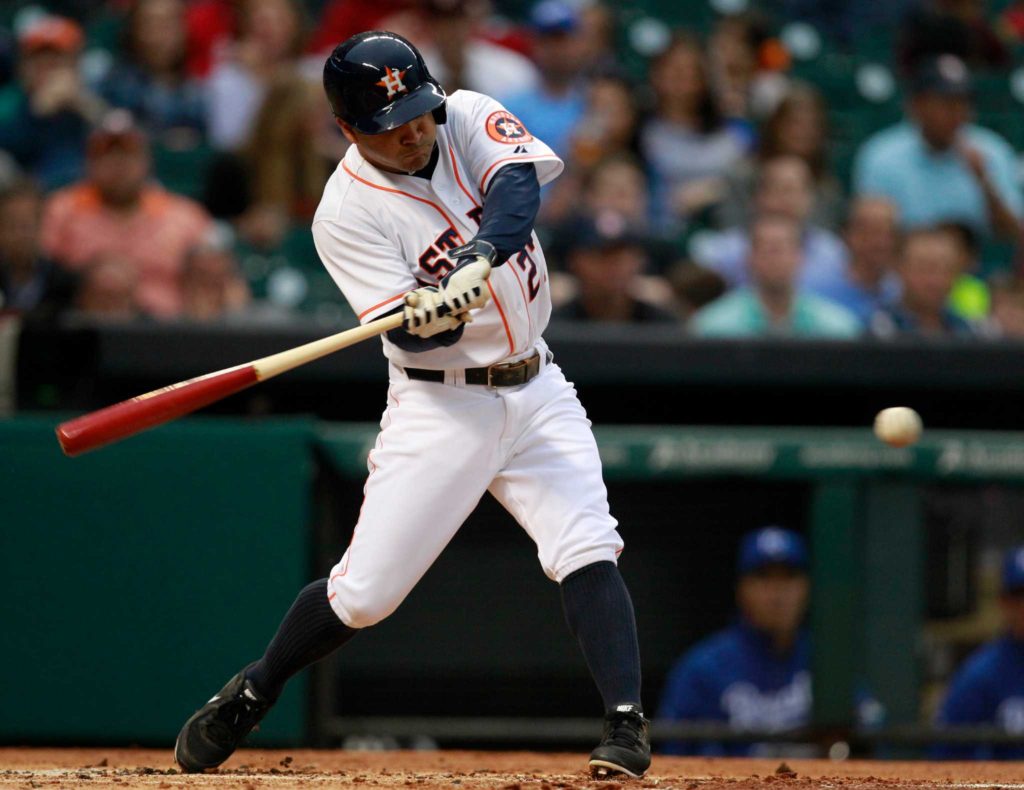 In doing Jose Altuve hitting analysis, here’s what I hear…

…Is the EXCUSE from coaches who’re removing any responsibility to help their smaller hitters hit the ball farther and harder.

ALL Major Leaguers are GIFTED!!! lol

Tell me one physical advantage that Dustin Pedroia has over most…??!

There are countless other MLB hitters with the same superior eye-hand coordination and vision.

The reality is, smaller sluggers MUST be MORE effective, in order to compete with sluggers bigger than them.

…and weighing in at a soaking wet 165-pounds, we’ll look at Jose Altuve (his height and weight numbers are a little closer to reality I think).

I do think Jose Altuve has one thing over the ‘laser show’, and that’s dancing (parental guidance is recommended 😉:

In this Jose Altuve hitting analysis video, we’ll go over:

FYI: the pitch Jose Altuve is hitting in the video analysis looks like an 87-mph FB straight down broadway, and it does look like he’s on-time.

Without further adieu, here are the notes for the…

How Well he Dominates the Plane of the Pitch

Where his Power Comes from…

Does he Practice Pitch Recognition?

My friend Aaron Miles, who was small (5’8″, 180-lbs), and played 9 years in the Bigs, talks about how his High School coach was forward thinking…in that he did Pitch Recognition training with his troops, and Aaron’s coach said he had the best PR on the team.

My hypothesis in this Jose Altuve hitting analysis is that he does some sort of PR training, OR has a God given early pitch recognition ability that allows him to hit the ball so hard, so often.

Sure, according to this Jose Altuve hitting analysis,

…Altuve may not hit over 30 homers per year, but he sure will hit a boat load of doubles, which is just as good to contributing to team wins…just look at his above average (average) ISO and BABIP scores above!

“How does a smaller slugger compete with a bigger one?”

We’ll be going over:

Imagine entering a contest to win a million dollars by copying a simple 1,000 word document…

And you had the choice to either write the essay using pen and paper, OR

Type it on a computer keyboard.

If the contest chairperson crowned the new minted millionaire to the fastest produced document, using one of the two aforementioned methods, which would you choose to compete?

What if, to get ready for the contest, you were given 3 weeks to prepare and practice pacing your writing OR typing skills?

Would this practice time make a dramatic difference on the speed of your writing skills?

How about your typing skills?

Which method do you think you’d make a bigger jump to compete with the best of the best?

Remember, there are no separate categories in the contest.  In other words, if you decide to write with pen and paper, you’re still competing with the fastest typers, not ONLY with writers.

Which leads us to… 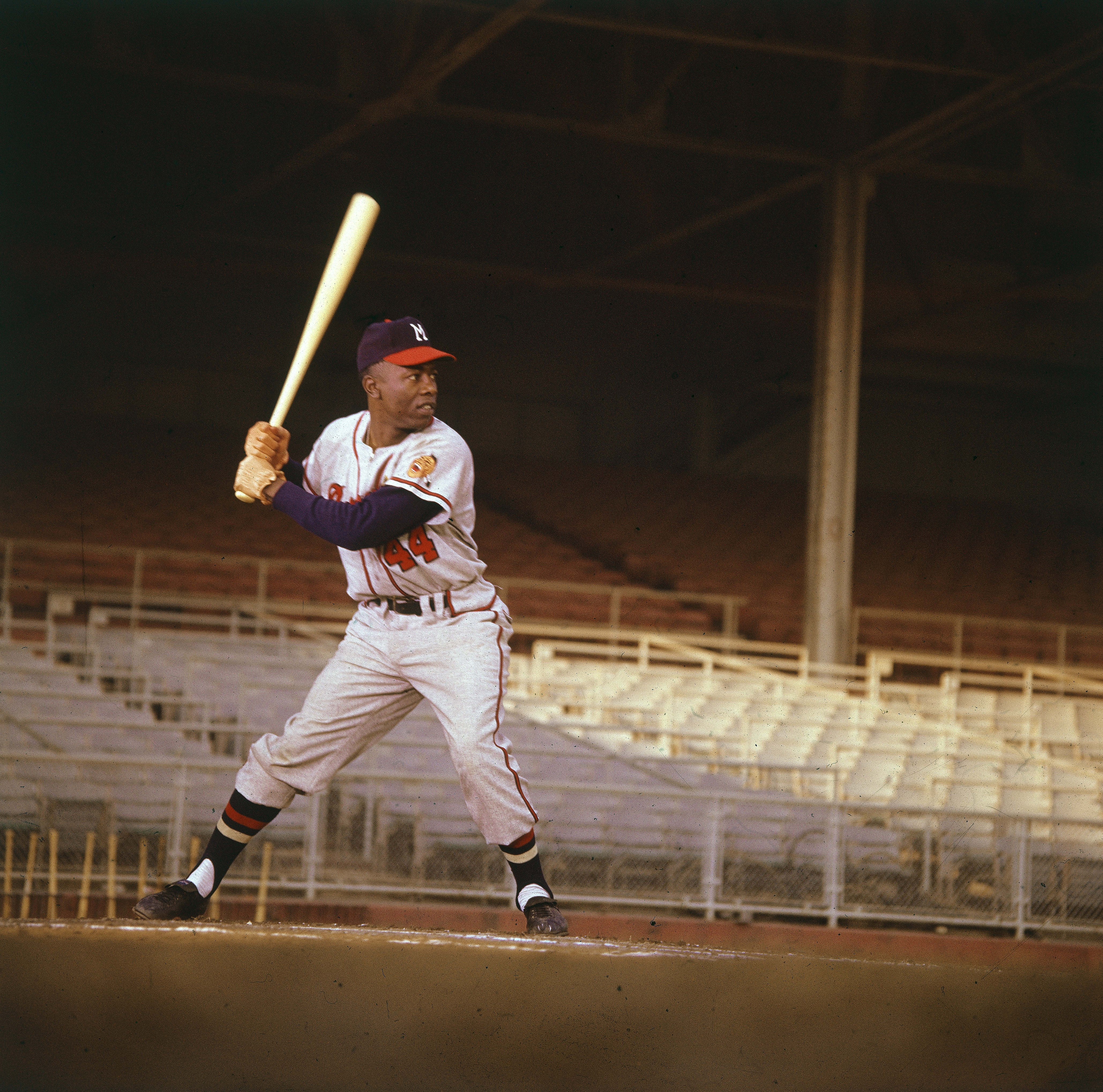 Hank Aaron waits for the pitch in an empty stadium. (Photo by Hulton Archive/Getty Images)

Effectiveness is doing the right things…

While efficiency is doing those things right.

In the case of our Writing v. Typing million dollar contest,

Choosing the right method to win the contest is huge.  The fastest typer in the world can blow away the fastest writer, any day of the week.

So, effectiveness in winning the million dollars would be choosing to compete as a typer.  Then the next step would be to get really efficient at typing during the 3-week practice period.

How does this metaphor relate to little league baseball batting tips and repeatable power?

Smaller sluggers like Hank Aaron (6-foot, 180-pounds) have to be effective with their mechanics, in order to compete with bigger sluggers.

Bigger sluggers get away with MURDER!

They often succeed despite their ineffective technique, not because of it…

A bent neck position at impact…NOT pre-loading the springy fascia in the body…OR thinking if we ‘load and explode the hips’, then all will take care of itself.

These big slugger examples may seem like valuable little league baseball batting tips, but in reality, young hitters WILL be left with ineffective energy transfers, resulting in inferior results.

Then why are we studying big sluggers like Albert Pujols, Bryce Harper, and Big Papi?

Although these big sluggers do A LOT effectively with their mechanics, at least in the eyes of validated human movement science, BUT they get away with energy leaks most young hitters won’t be able to pull off.

One of the best athletes to ever walk the earth is Michael Jordan.  His short stint in the Minor Leagues never amounted to Major League time.  He complained he couldn’t hit the curveball.  And by the way, Michael Jordan would be considered a bigger slugger today at 6-feet, 6-inches tall.

How about Arnold Schwarzenegger in his heyday using steroids during the 1970’s? Could he beat Jose Bautista or Josh Donaldson in a Major League home-run derby?

It doesn’t matter how big a hitter is, or how athletic they are, or if they take PED’s.  All can achieve repeatable power by using effective hitting mechanics.  It’s a recipe anyone can follow.

Sure, being more athletic is a component, but is not THE little league baseball batting tips method to hitting the ball consistently hard like Hank Aaron.

Screw those coaches. I didn’t believe the time frame of the catapult system. My son at 10 (90 lbs) is highly coach-able. I taught him the sy… END_OF_DOCUMENT_TOKEN_TO_BE_REPLACED

Hey Joey.  I just wanted to let you know how Brayden did this spring for baseball.  For little league Brayden batted over .800.  He also … END_OF_DOCUMENT_TOKEN_TO_BE_REPLACED

Actually works and teaches the coach on how to teach hitting to younger kids. Ever get frustrated while explaining hitting to a little leagu… END_OF_DOCUMENT_TOKEN_TO_BE_REPLACED

I use the system to teach my son and he is 4’11 67 pound 10 year old. Meaning he is super skinny and very tall. He hit one in tryouts yester… END_OF_DOCUMENT_TOKEN_TO_BE_REPLACED

“I bought into this two years ago and bought the book. I coach Fastpitch travel softball. From top to bottom of our batting order pitchers h… END_OF_DOCUMENT_TOKEN_TO_BE_REPLACED

I have read this book. A couple times to make sure I understand the science. It has changed my daughter’s life. Literally. She was always a… END_OF_DOCUMENT_TOKEN_TO_BE_REPLACED

Let me just say thank you. This book explains things that seemed unexplainable in the past. You just had to get it. Great stuff. I was a big… END_OF_DOCUMENT_TOKEN_TO_BE_REPLACED

I’ve gotten the oldest 3 “professional” instruction with their swing mechanics and approach with mixed results. Often times, Id have to spen… END_OF_DOCUMENT_TOKEN_TO_BE_REPLACED

Thank you so much for your help through your book T.C.L.S. I am 13 and weigh around 105 and I finally hit my first home-run! (The field I wa… END_OF_DOCUMENT_TOKEN_TO_BE_REPLACED

“Hi Coach, I’ve bought two copies (CLS book), one for me and one for my grandson’s coach. I also have three of your online programs.  Des… END_OF_DOCUMENT_TOKEN_TO_BE_REPLACED