You are here: Home1 / tension compression 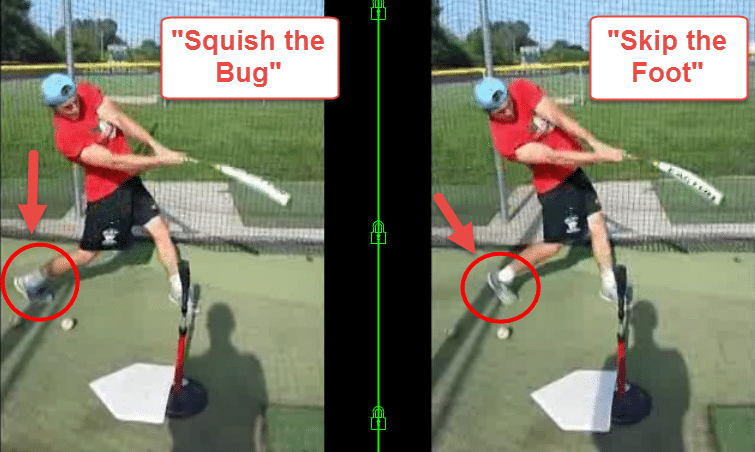 Here are the two test swings from my intern for the summer, redshirt college Frosh, Tyler Doerner…

This can be a very sore subject, and hotly debated with a passion, in the Church of Baseball.  Surprisingly, it's still widely taught throughout the lower levels.  Although a few images off the internet of effective swingers like Cano, Bautista, McCutchen, etc. will reveal “squishing the bug” isn't what the best are doing.

So we wanted to test it…

My intern for the summer, redshirt college freshman Tyler Doerner did this experiment.  This post is for you Joe (you know who you are ;-)…

One of the main objectives of whether to skip the foot, or keep it on the ground, has to do with transferring linear momentum, better known as un-weighting or forward momentum.  Check out these four HPL posts for a baseball swing mechanics background on this:

Now, for you academics, CLICK HERE to watch a short 2-minute PBS video on Circus Physics and the Conservation of Linear Momentum.

So, after reading/watching the above videos and posts, we should be at a common understanding of Forward Momentum.

The next objective of “squishing the bug” versus “skipping the back foot” during the turn, boils down to allowing the body to transfer energy effectively.  This has to do with springy fascia in the body…

, he talks about a cotton candy like springy material that the bones and muscles float it, and what gives muscles their shape called fascia.

Specifically in the book, he talks about the Front & Back Functional Lines.  CLICK HERE for a post I did on this, featuring Ted Williams and Matt Kemp.

In the following video, Thomas Myers explains this idea of Tensegrity, or Tension-Integrity.  There are compression and tension forces acting on the body at all times.  Within the body these two opposing forces are always searching for balance…

For a hitter, if the body moves forward, but the back foot and leg stays behind, then these forces don't get optimally transferred from body to barrel to ball.  In other words, the backside gets “left behind”.

Based on the above research, I think “squishing the bug” baseball swing mechanics will have a depressing effect on bat and hand speed because it doesn't allow for full transfer of momentum and release of elastic energy in the springy fascia. 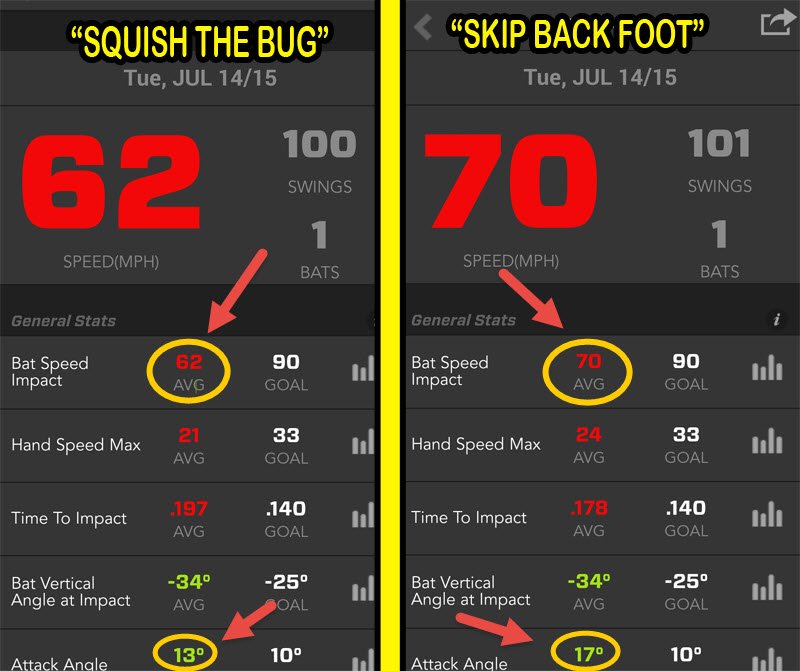 There were significant changes in Average Bat & Hand Speed, Time to Impact, and surprisingly, the hitter's Attack Angle in this baseball swing mechanics experiment…

In this “Squish the Bug” baseball swing mechanics experiment, “Skipping the Back Foot” showed a notable difference in average Bat & Hand Speed, Time To Impact, and the hitters Attack Angle.  I want to encourage you to tinker and test this for yourself.  The objective of these swing experiments is to put modern hitting theory to the test, literally.  We NEED to test based on data, not feelings.  Share these results with friends.

Grab This FREE 'Timing Master Class' Video
Struggling to get your hitters ON-TIME in games? Discover HOW TO build effective laser-focused timing, so your hitters can be ON-TIME more often. These principles are validated by REAL science. Click the button below to access the FREE video that has been downloaded over 6K times!
Click here to 'Get Instant Access'
July 28, 2015/19 Comments/by Joey Myers
https://hittingperformancelab.com/wp-content/uploads/2015/07/baseball-swing-mechanics-experiment-tylerd.png 452 755 Joey Myers https://hittingperformancelab.com/wp-content/uploads/2018/05/hitting-performance-labs_c90c0362088ef1d3d528f3078f4f8ac1.png Joey Myers2015-07-28 18:07:412018-07-23 16:01:57Baseball Swing Mechanics Experiment: Squash The Bug Ineffective?

I have read this book. A couple times to make sure I understand the science. It has changed my daughter’s life. Literally. She was always a… END_OF_DOCUMENT_TOKEN_TO_BE_REPLACED

Screw those coaches. I didn’t believe the time frame of the catapult system. My son at 10 (90 lbs) is highly coach-able. I taught him the sy… END_OF_DOCUMENT_TOKEN_TO_BE_REPLACED

Hey bud…Jayden had his best batting practice ever last night.  Hit at least 9 balls around 300-feet or farther.  I’m so happy with his progr… END_OF_DOCUMENT_TOKEN_TO_BE_REPLACED

Let me just say thank you. This book explains things that seemed unexplainable in the past. You just had to get it. Great stuff. I was a big… END_OF_DOCUMENT_TOKEN_TO_BE_REPLACED

I purchased this book last winter not only to teach myself but also my 5 year old son. I also purchased a Zepp’s Swing Tracker at the same t… END_OF_DOCUMENT_TOKEN_TO_BE_REPLACED

Thank you so much for your help through your book T.C.L.S. I am 13 and weigh around 105 and I finally hit my first home-run! (The field I wa… END_OF_DOCUMENT_TOKEN_TO_BE_REPLACED

Thank you Coach! Your stuff is great! My son got his first home run 2 weeks after reading your book. Keeps getting more and more distance no… END_OF_DOCUMENT_TOKEN_TO_BE_REPLACED

I like what you bring to the hitting world. You speak of things that are not normal hitting talks. The way the body works. I coach 12u Softb… END_OF_DOCUMENT_TOKEN_TO_BE_REPLACED