I wanted to analyze a young lefty slugging Colorado Rockies outfielder by the name of Corey Dickerson.  Standing and weighing in at 6-foot, 1 inch, and 205 pounds, Dickerson isn’t a big guy by today’s standards.  And comparing key offensive indicators (photo on right), puts him in decent company…

FanGraphs.com says this about OPS & OPS+:

“OPS is the widely used metric measuring a hitter’s contact, patience, and and power.  Since OPS+ adjusts for league and park effects, it’s possible to use OPS+ to compare players from different years and on different teams.” 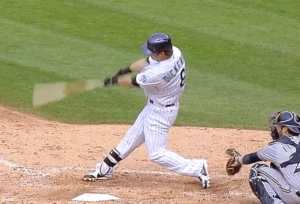 How efficiently a hitter gets into their Fight (landing) Position can dramatically effect their OPS and OPS+.  In analyzing Corey Dickerson swing, we’ll see how he uses THREE scientifically proven human movement laws to dominate his Fight Position:

These are Gravitational Forces at work.  By pushing into the ground (trampoline canvas), the surface pushes back with an equal and opposite force.  Corey Dickerson amplifies Gravitational Forces by “getting shorter” and dropping his body-weight into the earth when he lands into his Fight Position.  The ground gives thanks by giving him a push back! 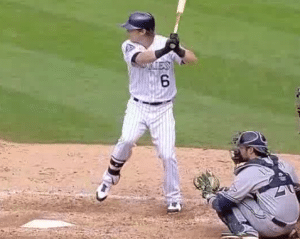 In science, this is commonly referred to as the Conservation of Linear Momentum.  In Corey Dickerson’s case, here’s how it works:

Corey Dickerson lands with an open hip-knee-toe to set up the turning of the pelvis.  His front knee is bent and stacked almost over his ankle allowing him to push into the ground (Gravitational Forces).  This will make way for what’s called “Blocking” during the Final Turn.  Next… 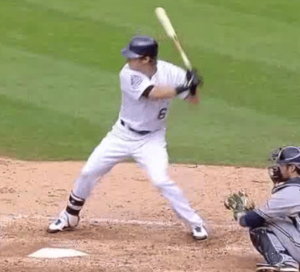 Blocking the shoulders from opening too soon is critical to repeatable power.  Tony Gwynn calls this “staying on the ball”.  And Corey Dickerson does the basics (a la Gwynn).  He’s not loading his torso’s springy material optimally.  I believe he’s leaving 10% of his repeatable power on the table.  Here’s how he can improve his Fight Position:

The Fight Position is one of THE most critical points in the swing.  As you can see, Corey Dickerson uses THREE (2.5, lol) scientifically proven human movement laws before he lands his Fight Position.  To me, at least 70% of hitting faults can be fixed here.  Make sure you’re swinging smarter by moving better!

Do ONLY Strong Baseball & Softball Players Hit Farther Homeruns? How Far? Can Average Person Do It? Sadaharu Oh Lessons On How To Get First One! 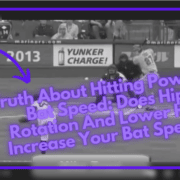 Does Using Hip Rotation & Lower Half Increase Hitting Power Or Bat Speed? At Home Swing Drills NOT What You Think

Actually works and teaches the coach on how to teach hitting to younger kids. Ever get frustrated while explaining hitting to a little leagu… END_OF_DOCUMENT_TOKEN_TO_BE_REPLACED

I’ve gotten the oldest 3 “professional” instruction with their swing mechanics and approach with mixed results. Often times, Id have to spen… END_OF_DOCUMENT_TOKEN_TO_BE_REPLACED

I have read this book. A couple times to make sure I understand the science. It has changed my daughter’s life. Literally. She was always a… END_OF_DOCUMENT_TOKEN_TO_BE_REPLACED

I am a Physical Therapist your stuff in body movements is awesome. I went to some FMS courses and Gray Cook spoke highly of you.  Your appr… END_OF_DOCUMENT_TOKEN_TO_BE_REPLACED

I purchased this book last winter not only to teach myself but also my 5 year old son. I also purchased a Zepp’s Swing Tracker at the same t… END_OF_DOCUMENT_TOKEN_TO_BE_REPLACED

Thank you Coach! Your stuff is great! My son got his first home run 2 weeks after reading your book. Keeps getting more and more distance no… END_OF_DOCUMENT_TOKEN_TO_BE_REPLACED

Hey Joey.  I just wanted to let you know how Brayden did this spring for baseball.  For little league Brayden batted over .800.  He also … END_OF_DOCUMENT_TOKEN_TO_BE_REPLACED

Screw those coaches. I didn’t believe the time frame of the catapult system. My son at 10 (90 lbs) is highly coach-able. I taught him the sy… END_OF_DOCUMENT_TOKEN_TO_BE_REPLACED