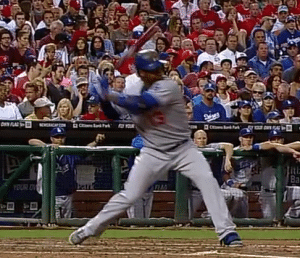 This post will clarify why the “Snapping Towel” concept is far superior than a hitter who “Sits Back.”  An efficient swing uses the Un-Weighting Principal, or Forward Momentum.  Basically, it’s a hitter getting a “head start”, and making an aggressive move towards the pitcher.

CLICK HERE to watch the Troy Tulowitzki Experiment and see how un-weighting can boost bat speed.

Most coaches, instructors, and even decent Major League hitters HATE what I’m about to tell you.  They say, early head movement speeds up the pitch.  They say, you can’t commit your body-weight to the front leg because you’ll be out in front of off-speed and breaking stuff.

WHY the Snapping Towel? 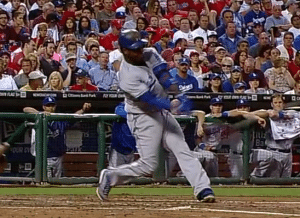 Would you rather have head movement before or after front foot landing?  The question isn’t IF the head is going to move during the swing, it’s when.  Thanks to proprioception.

Imagine how you snap a towel…here’s the “Snapping Towel” effect applied to Hanley Ramirez’s 2013 homer to left field off a Cliff Lee cutter going 85 mph:

Can Hanley Ramirez’s Fight Position get better?  Sure!  He’s not using Gravitational Forces like he can by flexing his front knee a little more at landing.  I call this “getting shorter”.  Which brings us to the next point…

Importance of “Getting Shorter” in Fight Position (landing) 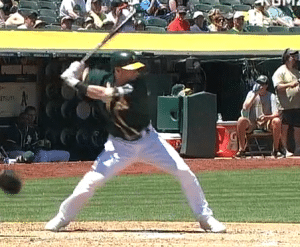 Because Hanley Ramirez DOES NOT “get shorter” into the Fight Position, he compensates by reaching for the Cliff Lee cutter.  Landing taller forfeits setting the pitch plane early.  And a compensating shoulder angle on a low pitch (more parallel to ground) limits force production.  It’s like letting the air out of a balloon.

But most importantly, in respect to hitting the curveball…

Getting shorter into the Fight Position also creates a defense mechanism to breaking and off-speed stuff.  Jaime Cevallos calls it, in his book Positional Hitting

, a “cushion” or “double cushion”.  JK Whited of Baseball Rebellion calls it “pushing the pause button”. 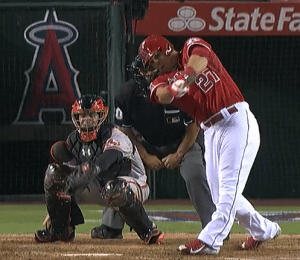 Here are my top ways to train a hitter to crush the curveball, like Hanley Ramirez.  First of all, utilize the Break-It-Apart Drill to get hitters comfortable operating from a “paused” Fight Position.  Use the Rule of Variance in one or a mix of these THREE ways:

#1 focuses on making adjustments to a change in speed (or reaction time).  #2’s objective is looking for a specific pitch in a specific location (not recommended strategy in games until High School Varsity).  #3 is the name of the game.

I read the first edition of The Catapult Loading System a couple years ago. The only reason I did is because I have a Kindle Unlimited membe… END_OF_DOCUMENT_TOKEN_TO_BE_REPLACED

Actually works and teaches the coach on how to teach hitting to younger kids. Ever get frustrated while explaining hitting to a little leagu… END_OF_DOCUMENT_TOKEN_TO_BE_REPLACED

I’ve gotten the oldest 3 “professional” instruction with their swing mechanics and approach with mixed results. Often times, Id have to spen… END_OF_DOCUMENT_TOKEN_TO_BE_REPLACED

I use the system to teach my son and he is 4’11 67 pound 10 year old. Meaning he is super skinny and very tall. He hit one in tryouts yester… END_OF_DOCUMENT_TOKEN_TO_BE_REPLACED

Hey bud…Jayden had his best batting practice ever last night.  Hit at least 9 balls around 300-feet or farther.  I’m so happy with his progr… END_OF_DOCUMENT_TOKEN_TO_BE_REPLACED

Wow, I didn’t realize how researched this material actually was. I’m blown away how these simple movement patterns have been researched. I j… END_OF_DOCUMENT_TOKEN_TO_BE_REPLACED

I purchased this book last winter not only to teach myself but also my 5 year old son. I also purchased a Zepp’s Swing Tracker at the same t… END_OF_DOCUMENT_TOKEN_TO_BE_REPLACED

Let me just say thank you. This book explains things that seemed unexplainable in the past. You just had to get it. Great stuff. I was a big… END_OF_DOCUMENT_TOKEN_TO_BE_REPLACED

Thank you Coach! Your stuff is great! My son got his first home run 2 weeks after reading your book. Keeps getting more and more distance no… END_OF_DOCUMENT_TOKEN_TO_BE_REPLACED