Tag Archive for: back leg

You are here: Home1 / back leg

Answered: “Helping Get Youth Players To Stay On Plane And Not Dip Their Bodies When They Swing?”

In the above video, we’ll be discussing:

Hey, what’s going on. It’s Joey Myers again from the “Hitting Performance Lab. In this video, we’re gonna answer a reader question, this one is asking for advice to:

“Helping get youth players to stay on plane, and not dip their bodies when they swing”.

Now a couple things we have to define here, what ‘dipping’ is…

This is important to cover. Because there is some dipping that goes on, but I want to define what’s good versus what’s bad. What we should see with hitters, and good healthy spinal engine mechanics is, say with the righty, the shoulders will start in somewhat of a slightly down position, we call this the ‘Downhill shoulder’, and it’s just a side bend.

David Weck, founder of the BOSU ball, the RMT Club, and a lot of other cool stuff. He talks about this idea of the head over foot technique. The head shifts slightly over towards the front stride landing foot.  The side bend is crucial to the actual opposite action that’s gonna happen during the swing.

We’re gonna see the teeter totter effect of the shoulders starting down, and then they’re gonna flip up as I start my turn. Then what we should see is this shoulder, if we track the left one for a righty starts down, pops up. As we finish, should be back down again.  Think about those beautiful images of Mickey Mantle, Ted Williams, Babe Ruth, Lou Gehrig, in their finish, and the righties are kind of in this position. The lefties are in the opposite position.

We want to see a healthy accelerating-decelerating spinal engine, that is the healthy dipping that we should see if the shoulders or side bending.

6 Causes of Unhealthy “Dipping” of Body in Swing

I call it a ‘Collapsing backside’, so one of the causes of this is head stability. We’ll see a hitter will go chin to chest, when they’re at impact, going right into their sternum with their chin. Sometimes we’ll see the head go up (like looking up into the sky), we’ll see the bill of the cap go this way, and we’ll see the rear ear going to the rear shoulder, so for righties, right ear to the right shoulder. For lefties, left ear to the left shoulder.

There are some hitters in the big leagues that do this a little bit, they used to do this actually more in the past, they’ve been cleaning it up. But Andrew McCutchen used to go chin to chest, Bryce Harper would go rear ear to shoulder, Prince Fielder did what Harper did.  You even see Nolan Arenado more chin to chest. Because he tries to leave his head at impact, which I don’t recommend for younger hitters. When the head is in an unstable position, this creates a threat to the central nervous system. Wherever the head goes, the body follows.

If the head “rolls” (like Harper/Fielder)…when we’re rolling the head this way, you’ll see a collapsing of the backside, you see the whole body will dip, and it’s not a very strong position. Head stability is one of them, one of the causes of an unhealthy dipping of the body in the swing.

Arching the lower back, kind of similar to the neck, the C-spine. When we start arching the lower lumbar during rotation, which isn’t very good because you’re pushing the vertebrae together, and then rotating them, so you’re basically grinding. So, we don’t want to do that, and if we’re doing that, sometimes we’ll see this collapsing to the backside as well. You want to do it what’s called a ‘Hollow position’, or a ‘Hollow hold’, you can go on YouTube, and search “hollow hold gymnastics”, and you can find a video on how to practice this.  It’s basically taking the curve out of our lower lumbar, or lower back.

3. Straightening out Back Leg

The other thing that could be causing dipping of the body in the swing is straightening out the back leg.  This tends to follow both head instability, and/or arching of the low back.

The glute fires, the back glute, for righties the right glute, and the right quad fires to straighten the knee. It’s the hamstring that we see in professional studies of hitters, back hamstring that’s turning on a lot more than you see in amateur hitters, where they tend to try and lock that back knee out. The glute locks out, and what’s happening is that back glute is trying to support and create stability in the lower back. Because it’s going into a bad position, a compromised position. As long as we can fix the hollow, get them into more of a hollow position, we fix the head movement with the neck brace drill. Not a stiff neck brace, but a soft one.  We don’t want to immobilize the head, just create feedback for movement.

If you can correct this, you can crack the lower back – metaphorically speaking of course – then you can start to work the hitter into bending that back knee a little bit more, using the hamstring, lesser the quad, and lesser the glute. Those are again trying to protect that lower back, that can be a major cause of unhealthy dipping in the swing.

I am starting to actually see this in some of my hitters, not in a lot but a few of them.  Where they’re actually over rotated at impact. They’re making contact almost behind themselves, and their sternum in the middle of their chest is out over in left field (for righties, reverse for lefties). We must get them to under rotate, so we do a lot of “deep” tee drills, and get them to try and pull the ball off a deep positioned tee. You set it up almost in line with the hitter’s belly button, and get them to kind of hook it, and hook it around to slow down that sternum.  The hitter should look and feel like they’re swinging their arms across their body.

The upper half over rotating, we can also over rotate the lower half…

So, we use a VeloPro

to strap it to the back hip and back ankle.  We get them to try and keep the back heel on the ground (like George Springer), and keep the back foot sideways. If they’re over rotating, it could cause a collapse of the backside as well. Again, we want to be effective between our 90 degrees of fair territory, and when we over rotate either the upper or the lower half, then what we’re doing is we’re sliding our 90 over into foul territory, which doesn’t do us any good, any of our hitters any good.

There are things that you can do at the gym with your trainer, hopefully your trainer is versed on mobility and stability exercises (certified in the Functional Muscle Screen – FMS, or in TPI). When we’re talking core stability, you want to do a lot of things like planks:

So, you’re creating some rotation in there as well. You also want to do like ‘Hollow holds”, you want do things like that, you want to do maybe suitcase carries, where you’re carrying a dumbbell on one side of the body and trying to keep your shoulders square, things like that you can do. You can ask your trainer on how to create more core stability, but those are some things to think about if you’re asking yourself the same question as our reader: “Helping get youth hitters to stay on playing, and not dip their bodies when they swing”.

Work on the things we discussed, clean them up, and check them off your list. Your hitter will be in a more healthy body “dipping” position. Make sure that we’re swinging smarter by moving better, and before I let you go… 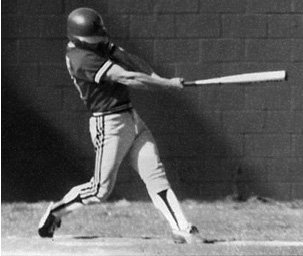 You guys are in for a treat…

I wanted to share with you a 1991 article published in Hardball Magazine about hitting.

Keep in mind that video motion analysis was virtually non-existent at that time.  Video cameras resembled what Michael J. Fox held in the movie Back To The Future 😛 lol

The information contained in the following two pages is eerily similar to what we talk about here at HPL.  Even down to the “buzz” words used!

And just to let you know, the ‘3 Shocking Mistakes…” are covered in the below article…

By the way, I’ve never come into contact with the gentleman I’m about to introduce until now…

The author of the published post, Jim Sullivan (J.D.), has accumulated the following credentials with his hitters over the last couple decades (from his website: Hitting4Contracts.com):

And he did this completely under the radar.  As he said, to escape coaches punishing his hitters in their lineups.  My hitters have received the same treatment, much like a lot of yours.

Crazy how fragile a 40-50 year old male ego is when it comes to hitting!

One of the hitters J.D. worked with at both the amateur and professional levels was Troy Glaus:

“JD introduced me to key concepts that are essential to my approach to hitting. Concepts that you won’t find anywhere else. I first met him in 1991 and have since spent serious one on one hitting time with him (as both an amateur and pro).  I have seen him greatly increase power in not only individual hitters but also entire teams.”

J.D. reached out to me via comment on my baseball swing mechanics “Squish the Bug” experiment YouTube video.  You guys may be seeing a lot more of him on the blog in the future…

Without further adieu, here are the two pages of the published article in 1991… 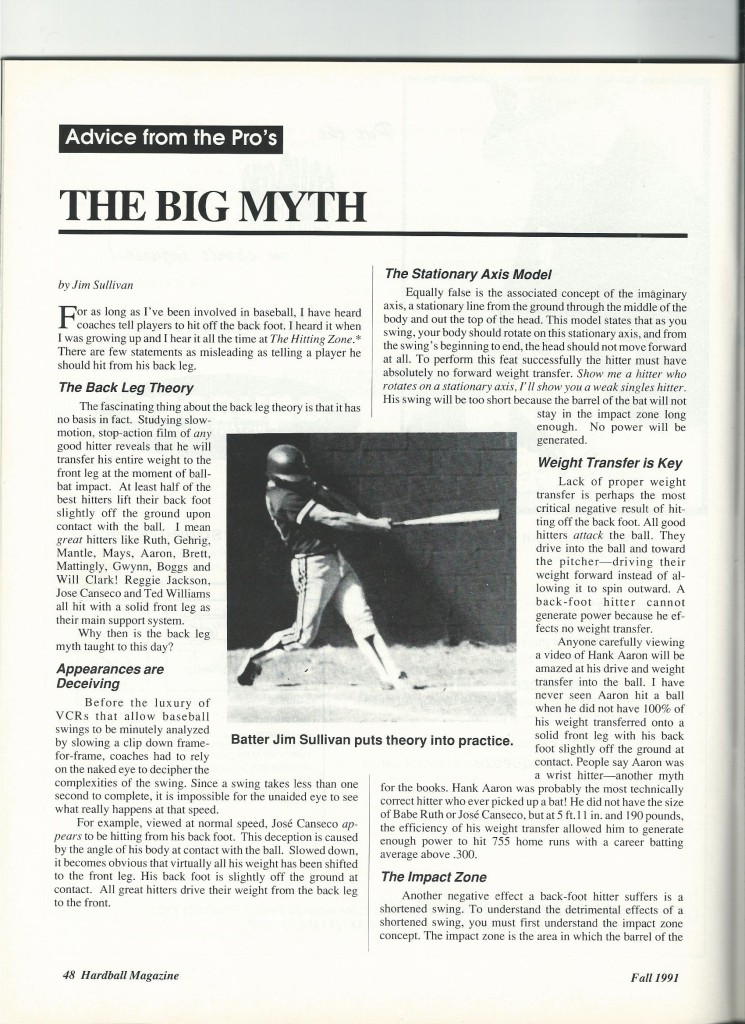 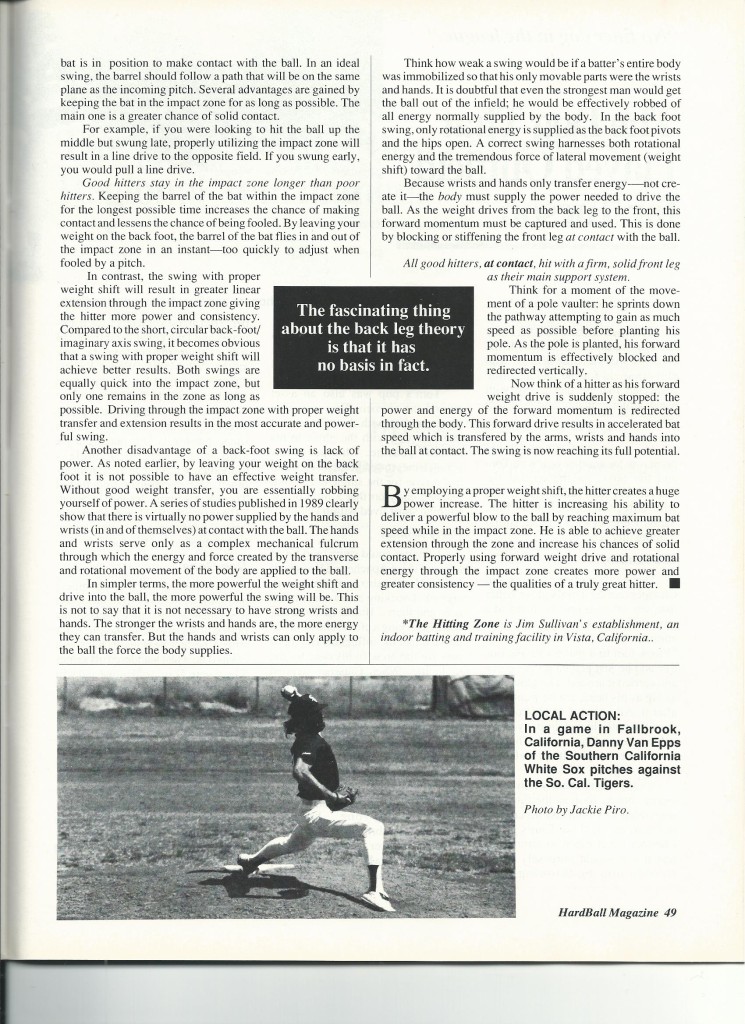 What are your thoughts on the article?

Grab This FREE 'Timing Master Class' Video
Struggling to get your hitters ON-TIME in games? Discover HOW TO build effective laser-focused timing, so your hitters can be ON-TIME more often. These principles are validated by REAL science. Click the button below to access the FREE video that has been downloaded over 6K times!
Click here to 'Get Instant Access'
187 Comments/by Joey Myers
https://hittingperformancelab.com/wp-content/uploads/2015/08/Mash-contrast5.jpg 256 303 Joey Myers https://hittingperformancelab.com/wp-content/uploads/2021/10/hitting-performance-labs_c90c0362088ef1d3d528f3078f4f8ac1-300x75.png Joey Myers2015-08-08 05:36:452018-05-17 18:03:503 Shocking Mistakes Killing Your Effortless Power

Actually works and teaches the coach on how to teach hitting to younger kids. Ever get frustrated while explaining hitting to a little leagu… END_OF_DOCUMENT_TOKEN_TO_BE_REPLACED

Thank you Coach! Your stuff is great! My son got his first home run 2 weeks after reading your book. Keeps getting more and more distance no… END_OF_DOCUMENT_TOKEN_TO_BE_REPLACED

Screw those coaches. I didn’t believe the time frame of the catapult system. My son at 10 (90 lbs) is highly coach-able. I taught him the sy… END_OF_DOCUMENT_TOKEN_TO_BE_REPLACED

Hey bud…Jayden had his best batting practice ever last night.  Hit at least 9 balls around 300-feet or farther.  I’m so happy with his progr… END_OF_DOCUMENT_TOKEN_TO_BE_REPLACED

I read the first edition of The Catapult Loading System a couple years ago. The only reason I did is because I have a Kindle Unlimited membe… END_OF_DOCUMENT_TOKEN_TO_BE_REPLACED

I have read this book. A couple times to make sure I understand the science. It has changed my daughter’s life. Literally. She was always a… END_OF_DOCUMENT_TOKEN_TO_BE_REPLACED

I’ve gotten the oldest 3 “professional” instruction with their swing mechanics and approach with mixed results. Often times, Id have to spen… END_OF_DOCUMENT_TOKEN_TO_BE_REPLACED

“Hi Coach, I’ve bought two copies (CLS book), one for me and one for my grandson’s coach. I also have three of your online programs.  Des… END_OF_DOCUMENT_TOKEN_TO_BE_REPLACED

Thank you so much for your help through your book T.C.L.S. I am 13 and weigh around 105 and I finally hit my first home-run! (The field I wa… END_OF_DOCUMENT_TOKEN_TO_BE_REPLACED