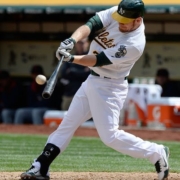 Brandon Moss Analysis Shows Timing Adjustment Must Be Made… 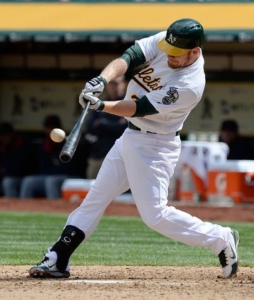 This Brandon Moss analysis comes from a conversation I had with Coach Justin Karr and his 12-U Bakersfield Sliders Black team.  Thanks Coach Karr, I hope this helps your troops!

I want to compare what Brandon Moss does differently hitting a slower pitcher, like knuckle-baller R.A. Dickey of the Toronto Blue Jays, to a hard throwing “King” Felix Hernandez of the Seattle Mariners.  We’re going to:

First of all, executing flawless hitting mechanics mean nothing if timing is off.  I love how Dr. Kelly Starrett describes learning complicated movements (or strategies) in his book Becoming A Supple Leopard: The Ultimate Guide to Resolving Pain, Preventing Injury, and Optimizing Athletic Performance

“When it comes to learning complicated movements efficiently, the key is to make them uncomplicated.  We do this by breaking them down into precise, manageable steps.  Then we emphatically encourage like-your-life-depends-on-it focus in performing each step.  This is the path to a tight learning curve.  It’s the foundation required for optimal performance.”

We focus on one aspect at a time.  In respect to the calibration of timing, we have to forget swing mechanics and focus solely on adjusting the timing. 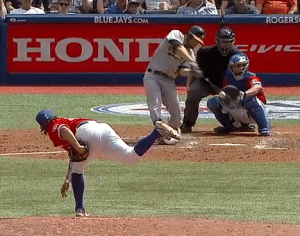 How-To Adjust to Slower Pitching According to Brandon Moss

In the video, I compare and analyze two 2013 home-run swings by the Oakland A’s first baseman Brandon Moss:

(*Home-run distances according to the ESPN Stats & Information Group)

CLICK HERE to revisit a video blog article I did, featuring Josh Hamilton and Mike Trout, where I went over:

For an average velocity pitcher, each hitter MUST figure out at what point in the pitcher’s delivery that they start their swing.  Then experiment starting the swing at a later point with a slower pitcher.  This will be slightly different for every hitter as the Josh Hamilton article shows.

The main point is, the hitter has to make a a conscience effort to change their timing.  They can’t just use the same timing for every pitcher.  Hitting is a game of inches…being one inch ahead or behind can mean barreling the ball or not.

Also, if the whole team’s offensive numbers are suffering against a slower pitcher, then the adjustment DOES NOT necessarily have to be a mechanical one.

I read the first edition of The Catapult Loading System a couple years ago. The only reason I did is because I have a Kindle Unlimited membe… END_OF_DOCUMENT_TOKEN_TO_BE_REPLACED

Actually works and teaches the coach on how to teach hitting to younger kids. Ever get frustrated while explaining hitting to a little leagu… END_OF_DOCUMENT_TOKEN_TO_BE_REPLACED

I’ve gotten the oldest 3 “professional” instruction with their swing mechanics and approach with mixed results. Often times, Id have to spen… END_OF_DOCUMENT_TOKEN_TO_BE_REPLACED

I use the system to teach my son and he is 4’11 67 pound 10 year old. Meaning he is super skinny and very tall. He hit one in tryouts yester… END_OF_DOCUMENT_TOKEN_TO_BE_REPLACED

Hey bud…Jayden had his best batting practice ever last night.  Hit at least 9 balls around 300-feet or farther.  I’m so happy with his progr… END_OF_DOCUMENT_TOKEN_TO_BE_REPLACED

Wow, I didn’t realize how researched this material actually was. I’m blown away how these simple movement patterns have been researched. I j… END_OF_DOCUMENT_TOKEN_TO_BE_REPLACED

I purchased this book last winter not only to teach myself but also my 5 year old son. I also purchased a Zepp’s Swing Tracker at the same t… END_OF_DOCUMENT_TOKEN_TO_BE_REPLACED

Let me just say thank you. This book explains things that seemed unexplainable in the past. You just had to get it. Great stuff. I was a big… END_OF_DOCUMENT_TOKEN_TO_BE_REPLACED

Thank you Coach! Your stuff is great! My son got his first home run 2 weeks after reading your book. Keeps getting more and more distance no… END_OF_DOCUMENT_TOKEN_TO_BE_REPLACED