You are here: Home1 / pulling head 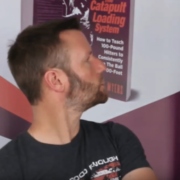 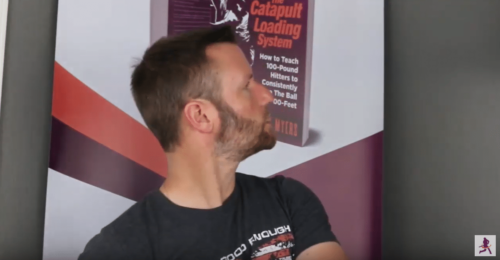 Hey what’s going on? It is Joey Myers from ‘Hitting Performance Lab’ again. In this video, I’m going to answer another reader question. This is actually an interesting one, and it’s one that I actually don’t see in lot of hitters, but I do occasionally see it. The reader comment we give advice on is: “I have a girl that closes her eyes when she is about to hit the ball”.

Now obviously, vision is a big part of this game – tracking the ball is a big part of baseball and softball. So, that would be something that we want to try and see if we can train into our swings. The moral of the story is repetition.  It just takes repetition. A lot of times the hitters that don’t take a lot of swings, on their own at home or whatever, they tend to kind of do this.

So, Arnold Schwarzenegger is supposed to be the good guy, and OJ Simpson ironically was supposed to be the bad guy. He was going to be the Machine. Arnold was sitting there at lunch with James Cameron, whoever the director was going to be, and they were talking. Arnold was saying “Hey, The Terminator is a machine, so tell OJ, coach him that when he shoots a gun or pulls a trigger or whatever loud sounds, his eyes can’t blink, he can’t blink. For those of you out there who haven’t read ‘Total Recall’ maybe don’t know that Arnold was actually in the Austrian army when he was younger, drove tank. He’s very versed, and has been around a lot of guns being shot off, cannons going off, and different things like that.

So, he’s giving James Cameron all these tips to give to OJ, and James Cameron goes “you know what, why don’t you be the Terminator, you know so much about being a machine”. Arnold was like “No, no, no”. He didn’t want to do it because he didn’t want to get typecast as the bad guy. But actually, hindsight being fifty-fifty, that was actually a good move by him. That’s what he ended up doing.

The idea of blinking, right. You can see it encapsulated in that Arnold Schwarzenegger story where you got a guy like OJ, who’s never been around that before, shooting guns and all this at least not till later right. You have Arnold who was trained in the Austrian military. So, you have Arnold who put in the repetition, OJ did not. This is why repetition is kind of the underbelly of a lot of the things that we’ll talk about in this video.

So, one of the first things though that could be an issue, and I’ve seen in local or some of my online hitters on video, is when I see the eyes closing, I also see the head turning. What Matt Notes calls ‘Chasing your face’, like there are swings chasing their face or pulling their head off the ball, pulling their head out. What they have to make sure that they’re doing first, because it doesn’t matter if they are closing their eyes, turning their head this way, is just as bad as closing their eyes. If you fix the eyes from closing at impact and major leaguers probably do this too, I don’t know if all of them, maybe they all keep their eyes open at impact. But you’re gonna see some blinking going on, but not right before impact. You’re not going to see this.

But you’ve got to make sure you should correct the head, so we want to make sure we’re swinging across our face. It’s not head pointing at the plate, swinging across our face like say Nolan Arenado. Our head actually, it’s gonna be somewhere, our nose and chin, it’s gonna be somewhere out in front of impact. We cannot see impact with the center part of our vision, we see it out of the corner of our eye. We want the head to be somewhere out in front of impact, out in front of the plate. Then we want them to swing across their face, not chase their face. So, that’s number one, and I’ll have a video link, or a link to another blog post where I talk about swinging across your face. Again, Matt Notes came up with that.

If you’re watching this on YouTube, just go down to the About section, click the link, go to the regular post, and the link should be in there. ‘Swinging across your face’. So, that’s number one…

Also, you can get good practice about hitting something with the bat, again think Arnold Schwarzenegger, Austrian army, shooting a lot of guns. By hitting a heavy bag with a bat or with your fists, then you get used to trying to see the bat or fist hit the bag. Getting used to that and trying to keep the eyes open while doing it. Again, repetition is key, and it’s not hundreds of swings a day. It’s what I tell my hitters, four days a week, five minutes each day, that’s all I tell them.

So, if you just worked on this, if this was a big issue, eyes are closing at impact and before impact, then I would say probably within two to three weeks, you’re gonna see a major change in your softball player, your baseball player’s swing. So, hitting the heavy bag is number one, you don’t have to worry about hitting the ball, about missing it, it’s actually a object that’s there, it’s big, they know they’re gonna hit it. So, they can practice with the eyes being open at impact.

The other thing is Wiffle balls and bats. Wiffle balls and bats are light, it’s meant to be light, it’s not gonna hurt them, they’re not gonna feel a lot of recoil from the ball off the bat. So, there’s really nothing to be afraid of if they get hit by the Wiffle ball, it doesn’t really hurt that bad, hopefully you’re not chucking it at them. Because it can hurt, but if you’re not chucking it at them, if they’re having a hard time with blinking their eyes, then you want to be kind and soft with the training at the beginning.

So, that’s another way that you can spend your four days a week, five minutes each day.

The other thing is pretty simple, if you have a tool shed at your house or in the garage…maybe you’re big into making stuff, carpentry and you have hammers and nails, best to do this. Because almost similar to hitting, the only thing is you’re hitting a stationary object but you’re taking the hammer, and you’re trying to pound that nail, just put nails out in a stump, if you got an old stump just like the old game who could sink the nail with one hit. Where you’re knocking the nail in, and have her or him, the hitter, practice hitting that nail and keeping their eyes open, and trying to see the contact point of the hammer, the head of the hammer, and the head of the nail.

Another way that you can do that, ‘Clapping’ is another way.  So clapping, try to keep your eyes open as you are clapping instead of blinking the eyes. Clap until they can do it, and have their eyes open during that motion. So, that’s another way to help kind of condition it.

But again, it’s all about repetition. Repetition is with all this stuff, again if you look at OJ in Terminator vs Arnold Schwarzenegger in the Terminator role. Arnold was better conditioned behaviorally to be able to keep his eyes open while firing a weapon, and act like an actual machine.

I hope this answered your question: “I have a girl that closes her eyes, when she is about to hit the ball”. Make sure that we’re swinging smarter by moving better, and before I let you go… 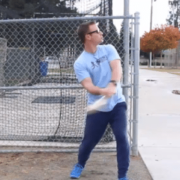 That’s a comment someone made about one of their biggest frustrations with hitting right now.  The above video will fix it!  A BIG thank you to Coach Matt Nokes for this! 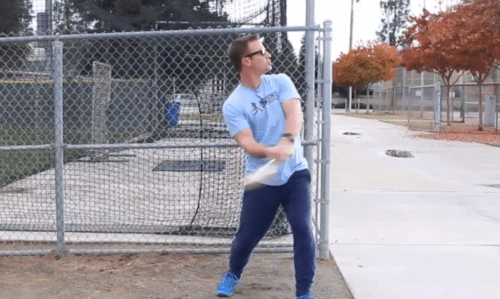 Swing ‘chasing your face’ VERSUS swinging ‘across your face’. Photo courtesy: ME!!

The following is the bullet point outline to the above video…ENJOY!

In this drill video, we discuss:

“Hi Coach, I’ve bought two copies (CLS book), one for me and one for my grandson’s coach. I also have three of your online programs.  Des… END_OF_DOCUMENT_TOKEN_TO_BE_REPLACED

I purchased this book last winter not only to teach myself but also my 5 year old son. I also purchased a Zepp’s Swing Tracker at the same t… END_OF_DOCUMENT_TOKEN_TO_BE_REPLACED

“I bought into this two years ago and bought the book. I coach Fastpitch travel softball. From top to bottom of our batting order pitchers h… END_OF_DOCUMENT_TOKEN_TO_BE_REPLACED

I have read this book. A couple times to make sure I understand the science. It has changed my daughter’s life. Literally. She was always a… END_OF_DOCUMENT_TOKEN_TO_BE_REPLACED

Actually works and teaches the coach on how to teach hitting to younger kids. Ever get frustrated while explaining hitting to a little leagu… END_OF_DOCUMENT_TOKEN_TO_BE_REPLACED

Hey Joey.  I just wanted to let you know how Brayden did this spring for baseball.  For little league Brayden batted over .800.  He also … END_OF_DOCUMENT_TOKEN_TO_BE_REPLACED

Screw those coaches. I didn’t believe the time frame of the catapult system. My son at 10 (90 lbs) is highly coach-able. I taught him the sy… END_OF_DOCUMENT_TOKEN_TO_BE_REPLACED

Let me just say thank you. This book explains things that seemed unexplainable in the past. You just had to get it. Great stuff. I was a big… END_OF_DOCUMENT_TOKEN_TO_BE_REPLACED