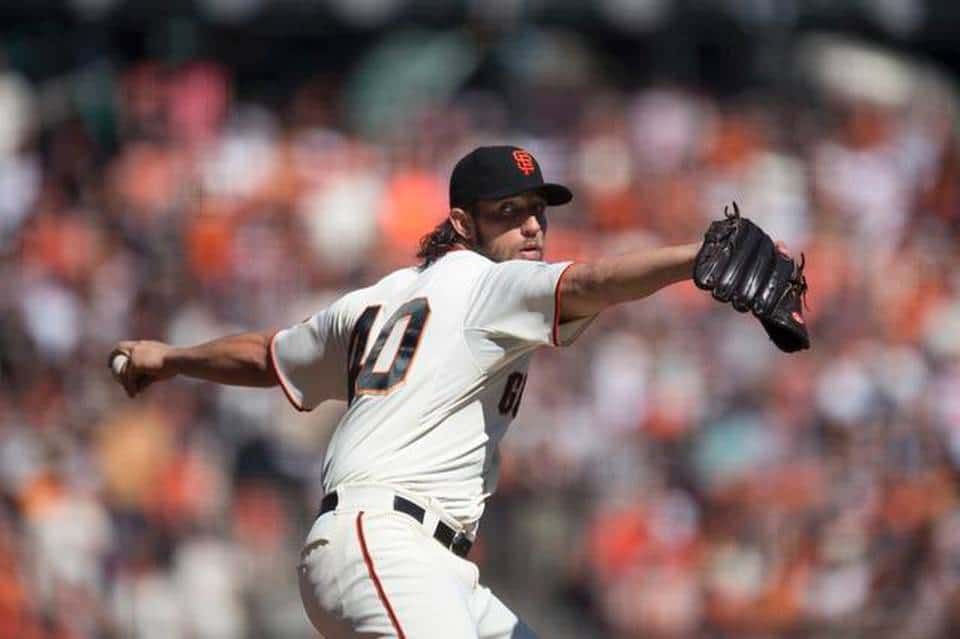 Madison Bumgarner using human movement science in the 2014 World Series. What can hitters learn from him?

I read somewhere that when Ted Williams was asked how a hitter could get more efficient with their swing.  He responded by saying to study a pitcher’s delivery.  In this pitching instruction for hitters post, we’ll look at 3 human movement laws, the: 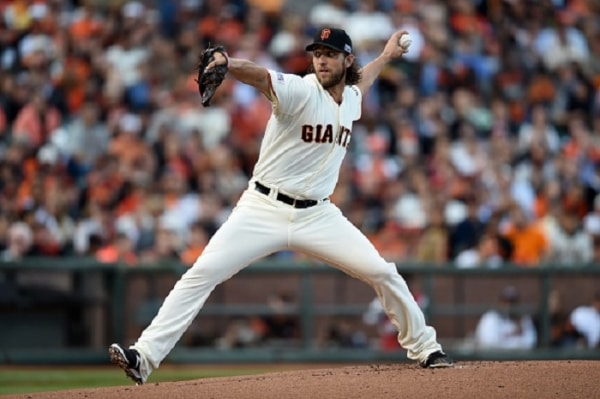 Known to proven movement science as the Conservation of Linear Momentum, aka Forward Momentum (FoMo) or the Un-Weighting Principle.  Madison Bumgarner employs Gravitational Forces with a nice easy fall down the mound.  Gravity doesn’t care if you’re a Shot Putter…Trapeze Artist…Lacrosse player…or a hitter.  As sure as the sun rises and sets, Gravity will be there to flow-with OR fight a hitter’s movements.  Here’s what happens when we:

Madison Bumgarner Pitching Instruction for Hitters Factor #1: Mad-Bum has a nice easy fall down the mound with minimal push with the back leg.  Too much push activates Reciprocal Inhibition.  Hitters employ a fall by committing the body-weight to the stride leg at landing, or the Fight Position. 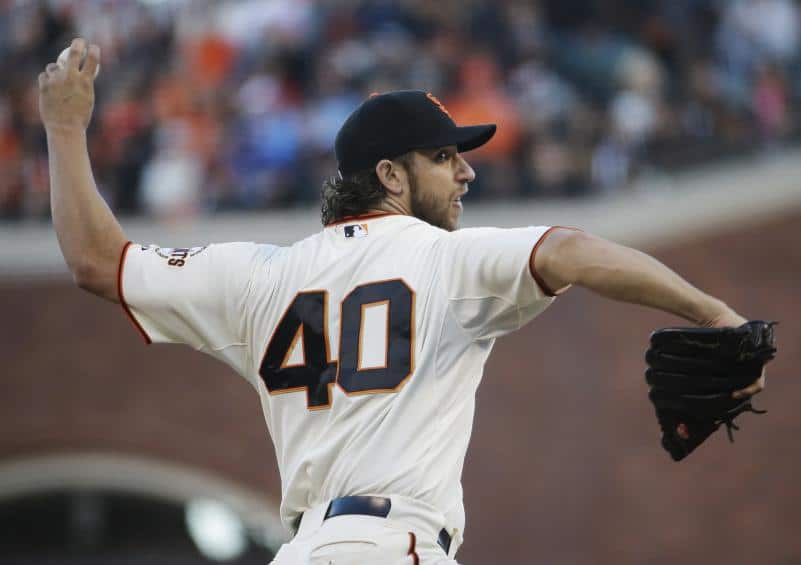 Known to proven movement science as the Conservation of Angular Momentum.  Madison Bumgarner is also known as the Candor.  As you can see from the photo of him above, his arms are stretched completely away from his body.  Imagine an ice skater who jumps off the ice, bringing her arms in, and spinning really fast.  She’s increasing what’s called her angular momentum, or rotational speed.

Now, imagine the same ice skater as she’s falling back to the ice from her jump, and she lengthens out her arms and one of her legs to slow down her body’s rotation.

This is referred to as increasing her moment of inertia, or inertial force.  You can’t maximize both rotational speed and inertial force at the same time.  They have an inverse relationship.  When one is up, the other is down.  Although, we can optimize both…

Madison Bumgarner Pitching Instruction for Hitters Factor #2:  Mad-Bum opens his “wings” like a condor right before his torso begins rotation.  As his torso starts rotating, he bends at the elbows and cuts his inertial force in half.  This gives his turning speed a boost.  Hitters like Hunter Pence, can do this by keeping a slight bend in the front arm at the initiation of the Final Turn.  Once the barrel’s on the plane of the pitch, then it becomes more important to increase inertial force (extending the front arm) rather than turning speed. 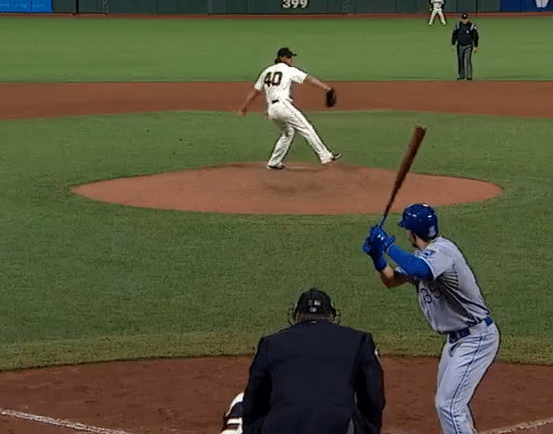 According to Thomas Myers (no relation) from AnatomyTrains.com, fascia is:

“Fascia is the biological fabric that holds us together. Fascia is the 3-D spider web of fibrous, gluey, and wet proteins that hold them all together in their proper placement. Understanding fascia is essential to the dance between stability and movement – crucial in high performance, central in recovery from injury and disability, and ever-present in our daily life from our embryological beginnings to the last breath we take.”

Fascia is to the human body like steel is to the building industry.  It’s very stiff and resist immediate change in shape.  CLICK HERE to see if Andrew McCutchen loads this springy connective tissue.

A hitter like Hunter Pence will do this slightly different in three ways: 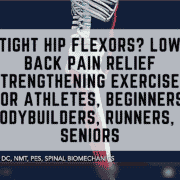 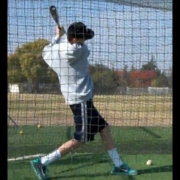 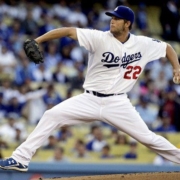 Hey bud…Jayden had his best batting practice ever last night.  Hit at least 9 balls around 300-feet or farther.  I’m so happy with his progr… END_OF_DOCUMENT_TOKEN_TO_BE_REPLACED

Wow, I didn’t realize how researched this material actually was. I’m blown away how these simple movement patterns have been researched. I j… END_OF_DOCUMENT_TOKEN_TO_BE_REPLACED

“Hi Joey, got the course and watched it all the way through early this morning.  Played in a game (+55 adult 12 inch slow pitch) around no… END_OF_DOCUMENT_TOKEN_TO_BE_REPLACED

Let me just say thank you. This book explains things that seemed unexplainable in the past. You just had to get it. Great stuff. I was a big… END_OF_DOCUMENT_TOKEN_TO_BE_REPLACED

Actually works and teaches the coach on how to teach hitting to younger kids. Ever get frustrated while explaining hitting to a little leagu… END_OF_DOCUMENT_TOKEN_TO_BE_REPLACED

I have read this book. A couple times to make sure I understand the science. It has changed my daughter’s life. Literally. She was always a… END_OF_DOCUMENT_TOKEN_TO_BE_REPLACED

I read your book the other day. I have only been using some of your Facebook posts to help my daughter with her swing, without understanding… END_OF_DOCUMENT_TOKEN_TO_BE_REPLACED

“Hi Coach, I’ve bought two copies (CLS book), one for me and one for my grandson’s coach. I also have three of your online programs.  Des… END_OF_DOCUMENT_TOKEN_TO_BE_REPLACED

“I bought into this two years ago and bought the book. I coach Fastpitch travel softball. From top to bottom of our batting order pitchers h… END_OF_DOCUMENT_TOKEN_TO_BE_REPLACED