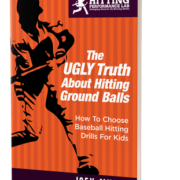 How To Effectively Use The Body To Get Pitch-Plane Domination 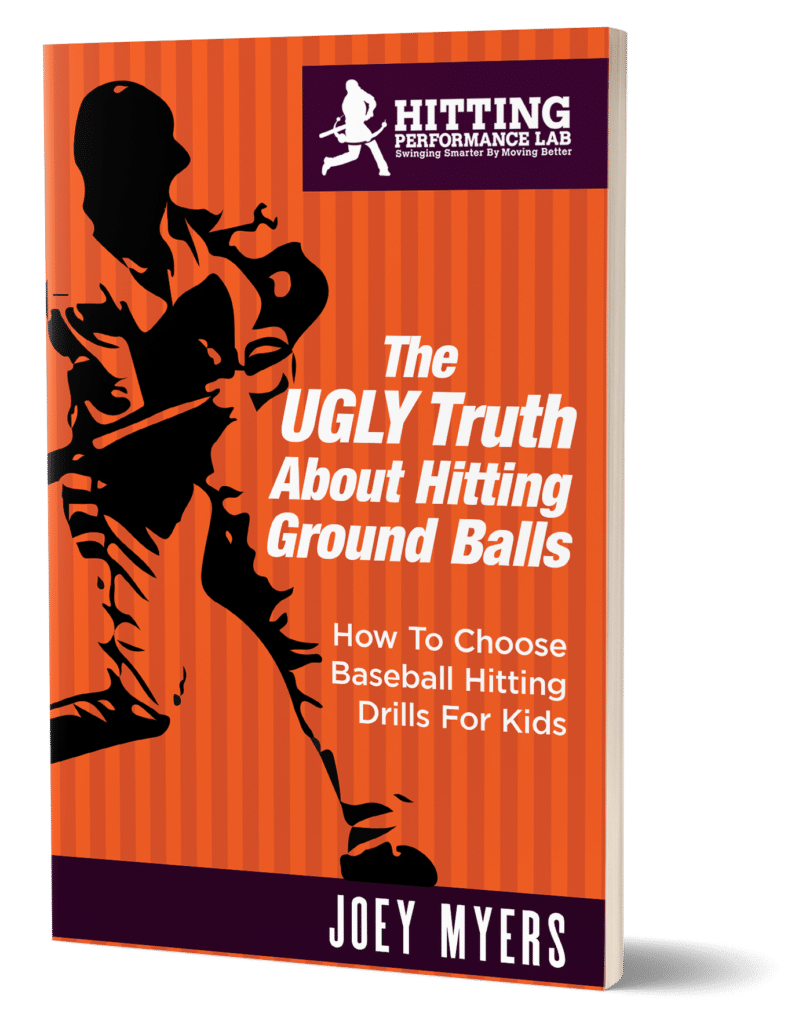 I’m not that much of a savage,

But what I have for you today is the Conclusion to my latest book, which is smaller in size – about 60-something pages, and is a re-publishing of my most popular Ground-ball RANT blog post I wrote the beginning of 2016.  This post achieved over 5,400 Likes on Facebook! 😀 (UPDATE: now this was before my Facebook “Like” website plugin broke, and I had to get a new one which erased all those wonderful Likes!!)

I’ll share the Conclusion  to the new book shortly,

Most of you probably didn’t miss the Ground-ball RANT, so the purpose of this book and post are a little different…

What I want for you to do is get this book and give it away as a gift.  Ideally to a coach who teaches their hitters to produce a lot of “worm-burners”, but one who may also be open to being persuaded from that unfounded malarkey.

You see, this subject has become somewhat of a movement on social media – if you haven’t noticed.  CLICK the following link for a fantastic breakdown post from Dan Farnsworth at the Hardball Times titled, “Ground Balls: A Hitter’s Best Friend?”

Now, back to The UGLY Truth book…

On sale, The UGLY Truth paperback will be $9.95, and the Kindle version will be $2.99.  And by the way, you don’t have to own a Kindle to read a “Kindle-version” ebook.  Just download the Kindle app on any mobile device, and BOOYA!  You can access it.

Do you have a High School coach in mind that could benefit from this information?  Or perhaps a Little League coach? Just recommend coach download the free ebook within those 5 days.  They have nothing to lose!  It would be to YOUR kid’s best interest 😉

Okay, so now I want to share the Conclusion to the book (which by the way, wasn’t in my original Ground-Ball RANT)…

A reader recently emailed me that his son, although having some success before, has switched over to “my stuff”.  Well, switch overs aren’t always smooth, and his son is hitting more ground-balls, so I suggested the following tips to STOP hitting ground-balls…

Enter the Conclusion to my new book now on sale at Amazon (with Kindle version free for a short period of time), The Ugly Truth About Hitting Ground-Balls: How To Choose Baseball Hitting Drills For Kids…

I have a treat for you…

You may be thinking what I teach my hitters to do since I don’t want them hitting ground-balls.  I very much agree with the Backspin Tee guys’ motto of ‘On Path of the Pitch, Bottom Half of the Ball’.  But how do you put that into practice?

There are five things I look for in a swing to get the barrel on the plane of the pitch longer, so hitters can hit more consistent line drives:

There are six benefits to landing with a bent front leg:

We’re not going through all six, but I wanted to highlight the last one…

Please do a YouTube search for: “armanti edwards route tree session“, and pay attention to how Armanti Edwards and other NFL wide receivers change direction while doing a “Route Tree Session” with trainer Gari Scott…

Watch them run these routes from a big picture point of view.  In other words, not looking for any specific arm or leg angles.  Watch them ‘get lower’ when changing directions, or cutting.  They land on a bent plant leg, then push off the same leg, extending it, to accelerate again.

There are three main human planes of motion:

In changing from one plane of motion to the other, to be effective, there MUST be a ‘getting shorter’ of the body’s stature, as the athlete plants and pushes off the ground to change directions.

In other words, just like an NFL wide receiver goes from a bent plant leg to straight at push off, a hitter MUST go from a bent landing leg, to a straight leg at ‘push off’.

Please CLICK the following link to see the other six benefits: http://gohpl.com/whybentfrontknee

Homer Kelly, an aeronautical engineer for Boeing during the Great Depression, said this about knee bend in his book The Golfing Machine:

Homer Kelly’s statement has as much to do with hitting as it does with the golf swing!  During the Final Turn, a hitter like Adrian Beltre uses his flexed back knee (and straightened front one) to slant his pelvis up towards the downward traveling pitch, and as a result, keeps his head motionless during the Final Turn.  Early head movement, pre-stride landing, is okay.  Late head movement is not.

Think of the back leg angle as angling your body like a “ramp”.  CLICK HERE for a great drill for getting hitters at a better “ramp” angle.

In addition, please CLICK the following link to see what happened with a swing experiment where I tested a bent versus straight back knee during the Final Turn: http://bit.ly/whybentbackknee

What was the results of the 200 swing experiment?

What does this mean?  That ‘squishing the bug’ is an inferior hitting mechanic.  Not ALL elite hitters “skip” the back foot, but most do “un-weight” it.  I just like teaching my hitters a minimal skip to make sure they’re shifting center mass  into impact, behind the front leg.  I read somewhere that Bryce Harper shifts 150% of his body-weight into impact (skipping his back foot), whereas if he just “squished the bug”, he’d only shift 75% of it.  That’s a HUGE difference!

Please CLICK the following link to read about the whole swing experiment: http://gohpl.com/whybackfootaction

I recently did a video blog post case study featuring one of my 15 year old baseball players Liam titled, “Taking The Headache Out Of Teaching Barrel Path”.  We used the Ropebat to change his “Verizon check mark” barrel path into a “Nike Swoosh” sign.

Why one over the other? I want my hitters to build proper bat lag into their swing, or an early barrel on the plane of the pitch.  This helps the hitter barrel the ball more often when their timing may be late.

What’s amazing about Liam’s transformation was that:

*Results aren’t typical. Liam has a primary “feel” learning style, so the Ropebat worked well for him – and not to mention quickly with minimal use.

The benefit of keeping the barrel on the plane of the pitch longer is to help the hitter when their timing is early, especially on off-speed and breaking balls.  I typically refer to this as the Power-V, however the V-position of the arms MUST happen AFTER impact.  It shouldn’t be a goal to get the hitter to Power-V at impact.  The latter would put hitters at a disadvantage to inside and higher pitches in the zone.

I also use the coaching cue ‘barrel chasing the ball’ when teaching this.  Please CLICK the following link to a video blog post titled, “Addison Russell Grand Slam Video: The Anatomy Of A Dinger”: http://gohpl.com/whybarrellateonplane

I highly recommend these two hitting aids and my Pitch-Plane Domination online video course, so you can help hitters to:

Please order the book today – we’re in a position to add gasoline to this movement to banish hitting ground-balls for good!!  Outside of situational hitting of course 😉  Join the movement and order: The UGLY Truth About Hitting Ground-Balls: How To Choose Baseball Hitting Drills For Kids on Amazon today. 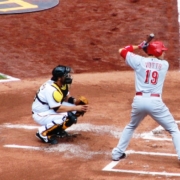 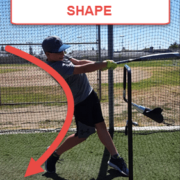 You Too Can STOP Head Movement With The Snapping Towel Drill 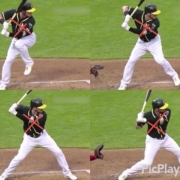 Baseball Batting Drills To STOP Dipping The Back Shoulder
6 replies

The Swing Does NOT Start From The Ground & Move Up? Scroll to top