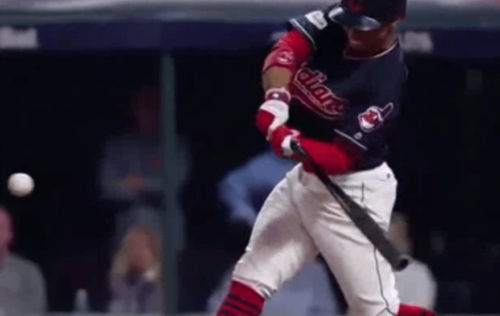 Now, let’s take a look at some of the stats and give a little context to this Francisco Lindor swing breakdown. You can see he is a smaller hitter, smaller slugger, 5-foot, 11-inches, 190-pounds. He switch hits.

So let’s start with the big three in the Catapult Loading System in this Francisco Lindor swing breakdown. You have the lefty at bat over here and the righty at bat over here. Let’s give a little context to these pitches in the at bats. This is the second one over here.

We’re going to look at the pitch speed, 88-mph. Some kind of breaking ball, maybe a slider, and this one he hit for home run into the right field bleachers or right center field bleachers, over here on the right his righty at bat.

He’s a little bit out in front. We have a 79-mph, probably a slider here. That he pulls in the five and a half hole.

OK, so what I referred to as the big three and the Catapult Loading System is the build more consistent power in a swing. There are three buckets. Two, our systems, the different systems we teach, that’s one of them.

The second one is the pitch plane domination system. And that’s all about how to hit more line drives and the reaction time mastery system, which is all about footwork, vision, tracking and timing.

This Francisco Lindor swing breakdown video, we’re going to be going over the first system, the power systems, the Catapult Loading System. I refer to the big three as “showing numbers”, “downward shoulder angle”, and “hiding the hands”.

What you’re going to see here, I have both of these swings synced up, on the left, the homer, on the right, the ball that he was a little bit out in front he pulled into the five and a half hole for a ground ball base hit.

You can see that if we rewind to the beginning. And just so you know, the camera angle in center field is slightly off center towards the left or left center. It’s in center, but slightly towards left. And that is going to show any kind of right-handed batter as showing their numbers more than the left. So just understand that this isn’t a complete apple to apples comparison, but you’ll still see the difference in their starting positions and their landing positions.

You can see here, you can’t see Francisco Lindor’s number really on the left, and you can start to make it out a little bit here on the right. Again, probably because of off centered camera in center field.

As the pitcher starts to get into the windup, gets ready to release the ball, you can start to see over here on the right … again, with our camera angle, you can see that #12, pretty clear as day at this point.

And what I want you to do is, again, with that skew with the camera, watch the pinstripe. If we put a dot in these spots, as you’ll see Lindor pull in more with the pelvis almost similar to the Javier Baez swing analysis that I did a few weeks ago, you saw Baez extremely turn that pelvis in. And my argument is that we don’t have to do that…

See here that that pinstripe you can’t see any more on the right side, but on the left side you can still see it. Again, we get a skewed camera angle, but it didn’t move quite as much on the left as it did on the right. So, this is something that Lindor actually doesn’t have to do and might be closing himself off just slightly. But nonetheless, you can see you can pretty much make out almost the full one in the two.

In this Francisco Lindor swing breakdown, you can see his head really anchoring down for it in a tracking position and he’s moving his shoulder underneath his chin as far as he can, creating a wringing towel effect between his head and his shoulders. And he’s creating this neck pressure at the T1/C7 vertebrae in the spine, just like wringing a towel out. And he’s creating that neck pressure, which as a result will show his numbers.

And also, could be on the right side since he possibly is inward turning his pelvis a little bit more. It could be why he’s shown his numbers a little bit more besides the camera angle. So that is the first of the big three, showing numbers or creating neck pressure.

He has this downward shoulder angle on the right. He’s not using his back elbow as much. We do use back elbow with the hitters to steer the shoulders down, but not all hitters will click with that. We’ll just tell those hitters that they seem to for telling him to raise the back shoulder at landing. Then what tends to happen is their hands start to balloon up and rise up. We don’t want the hands to get up past a certain height. We want to make sure that their hands are in it in a decent, more comfortable position around the shoulder height – back shoulder height to be able to launch from.

So, if the hitter is having a hard time by bringing that back elbow up, like you see Francisco Lindor over here on the left, then what we’ll tell the hitter to do is just lower the front shoulder.

He’s creating neck pressure, which is showing the number, this is a protraction of the front scapula for you movement nerds out there, you kinesiology nerds out there, and he is creating this downward shoulder angle so that his shoulders can actually flip.

The last piece of the big three is hiding the hands from the pitcher. So you can see the hands here from the left. You can see slightly the bottom hand on the right. And then you’re going to see those hands disappear. You’ll see them reappear back behind his head, on the right, on the left, not quite so much. You see them disappear behind his head. But again, we’re talking about a different camera angle here.

And some call this the scapula row or a rear scalp retraction for the kinesiology nerds back there.  We should see both a protraction of the front scapula, which is showing the numbers/neck pressure.

It is very hard for a hitter the size of Francisco Lindor to hit 30 homers a year for the last three or four years, without showing numbers and just doing the rear scapula retraction.

Not going to happen.

So those are the big three as it is to the Catapult Loading System, showing numbers, downhill shoulder angle, and hiding the hands. Now let’s check out the wrist snap…

A lot of young hitters, what they tend to do and there’s quite a few hitting instructors out there that are teaching this deep barrel dump and to “chicken wing” with the front elbow, 90-degree bend as it comes through impact.

You can see this was the pitch that was middle in that Francisco Lindor hit a homerun on to right. You can see how tight he keeps this barrel, and we talk about the belly button catcher’s glove…

But you can see in this Francisco swing breakdown. You can see him, his barrel entering the attack zone at the back-foot catcher’s glove, he’s actually a little bit late here, he ends up speeding it up with his wrist snap.

But what you’re going to see is almost like there is a wall happening here… And he’s going to get to this wall… And his hands are going to stop moving forward.

What we see with young hitters is we’ll see these hands continue forward and they end up way out over here, chicken winging with the elbow and their arm, front arm drifting far away from their chest, which we don’t want to do if we want a proper transfer of body to barrel to ball force.

We’re going to see the best hitters will stop, their hands will stop moving forward at a certain point, which you see is right here. It’s like the hands hit a wall and we have a wall drill for this, a wall turn or a phone booth drill that we use to help the hitter out with this, plus a wrist snap position.

As he gets through this ball and you’re going to see post impact … both arms get extended, full extension. Both arms. Power V. This isn’t the power V that was taught about a couple of decades ago to happen at impact, that’s not what we’re trying to do.

This is the power V that happens after impact, and with a proper transfer from body to barrel to ball we should see this passed impact.  But it uses a combination of the big three of the Catapult Loading System and the wrist snap. At one point, the knob has to stop moving forward linearly and has to let the wrist snap and pronate with the top hand. 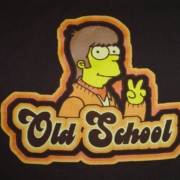 I use the system to teach my son and he is 4’11 67 pound 10 year old. Meaning he is super skinny and very tall. He hit one in tryouts yester… END_OF_DOCUMENT_TOKEN_TO_BE_REPLACED

Thank you so much for your help through your book T.C.L.S. I am 13 and weigh around 105 and I finally hit my first home-run! (The field I wa… END_OF_DOCUMENT_TOKEN_TO_BE_REPLACED

“I bought into this two years ago and bought the book. I coach Fastpitch travel softball. From top to bottom of our batting order pitchers h… END_OF_DOCUMENT_TOKEN_TO_BE_REPLACED

“Hi Coach, I’ve bought two copies (CLS book), one for me and one for my grandson’s coach. I also have three of your online programs.  Des… END_OF_DOCUMENT_TOKEN_TO_BE_REPLACED

Screw those coaches. I didn’t believe the time frame of the catapult system. My son at 10 (90 lbs) is highly coach-able. I taught him the sy… END_OF_DOCUMENT_TOKEN_TO_BE_REPLACED

I’ve gotten the oldest 3 “professional” instruction with their swing mechanics and approach with mixed results. Often times, Id have to spen… END_OF_DOCUMENT_TOKEN_TO_BE_REPLACED

Hey bud…Jayden had his best batting practice ever last night.  Hit at least 9 balls around 300-feet or farther.  I’m so happy with his progr… END_OF_DOCUMENT_TOKEN_TO_BE_REPLACED

I read the first edition of The Catapult Loading System a couple years ago. The only reason I did is because I have a Kindle Unlimited membe… END_OF_DOCUMENT_TOKEN_TO_BE_REPLACED