This is the first in a four-part series about balance, I’ll be discussing a not so common reason for lack of core balance.  In the following post, we’ll go over:

Jimmy (not his real name) came in with his dad to be evaluated for toeing in when he walks. Jimmy is 12 years old and 6 foot tall and weighs close to 200 pounds! Here’s how my conversation went with his dad…

I examined Jimmy and found that both of his thigh bones rotated inwards close to 90 degrees, but they only rotated outwards about 20 degrees instead of the same in both directions. I also noted that his feet flattened. This uneven rotation is called internal femoral position.

There are several reasons why people toe in (pigeon toes). It can be due to a “C” shaped foot (Metatarsus Adductus), a twisted shin bone (internal tibial torsion), or a twist in the thigh bone or hip joint (internal femoral position). Children that toe in tend to be clumsy and “trip over their feet”.

Why Your Balance Fails

About 30 years ago, I noticed that the children with internal femoral position had a history of falling forwards or backwards when they started to walk, whereas normal children would stick out their butt and land on their soft diaper.

This inability to land on their butt led me to ask a simple question-“How long did your child sit before he/she crawled?”. I found out that the vast majority did not sit at all. (The sitting occurs at about six months and should last for 2 weeks before the child starts to crawl).

As a result, when a child that kneels, starts to walk and gets imbalanced, the reflex is to bend the knees. This results in the falling forward or backwards. Children that sit, develop balance around the hips and can either flex or extend their hips and when they start to walk and become imbalanced, this hip balance point allows them to land on their diaper.

It turns out that the treatment for this balance issue is easily resolved in a short time. Jimmy was instructed to “Chair dance” for 10 minutes a day  and his football playing improved remarkably.

His toe in was treated with a combination of gait plates, exercises, and roller skating. This took longer, but he was eventually able to walk with his feet straight ahead.

So what does this have to do with baseball?

It turns out that the “W” sitting position in children is associated with less postural control and stability. Internal femoral position is associated with running like Daffy Duck, with the feet going out to the side. In baseball a hitter needs to be able to stand in a good stable hitting position. If a hitter wobbles, then the ball appears to move, making it more difficult to hit.

Joey Myers Comments: CLICK HERE to check out this article by Physical Therapist and co-founder of the Functional Muscle Screen (FMS) Gray Cook, on this article titled “Early Perspectives on Functional Movement”.

CLICK HERE for Part-2, where I’ll be discussing Ankle balance (frontal plane) and how to improve it… 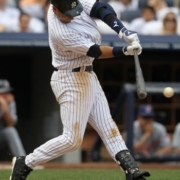 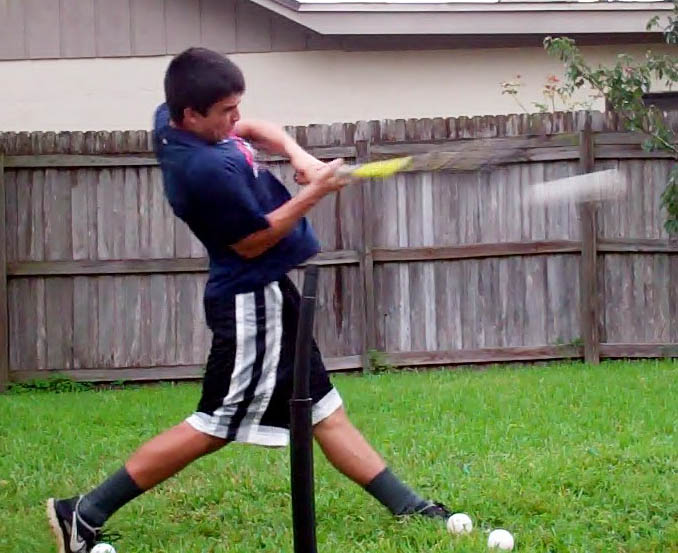 Danilo Collins, 16yo, from FL

I was recently introduced to Danilo Collins (pronounced Duh-nee-lo).  A 16-year-old baseball player in Florida.  Over email, he sent impact and follow through pictures (and video) of his swing, saying:

“Hey Joey, I have had this exact problem ever since I started filming my swing. During my final turn, at or near contact I find that my upper body tenses up. My shoulders shrug up, my face tenses up and tilts awkwardly, and my back arches in a weird, unnatural way.”

In this video blog, I want to address Danilo’s swing concerns using Derek Jeter as a model.  We’ll answer these three questions:

If we can get a hitter moving better, they’ll perform better.  Movement dysfunction puts performance on the back burner.  Let’s see how Derek Jeter’s swing compares…

Last week, I posted this to my Facebook fan-page using Danilo and Derek Jeter’s impact pictures, and received great feedback:

Here’s the jist of the Facebook feedback, in comparing Danilo to Derek Jeter:

Those great Facebook comments aside, I want to focus on something else that most don’t…

What Can Impact & Follow Through Tell Us About Movement Dysfunction?

I feel fixing movement dysfunction is just as important as efficient swing mechanics.  Without correction, the body loses the ability to move efficiently.  This dramatically decreases batted ball distance.  Here’s what to key in on at impact and follow through using Derek Jeter as a reference point:

If we compare Danilo to Derek Jeter, we can see a huge difference in the back leg angle, and how well the head, rib cage, and pelvis stack on top of each other.

What Exercises Can a Hitter Do to Correct This? 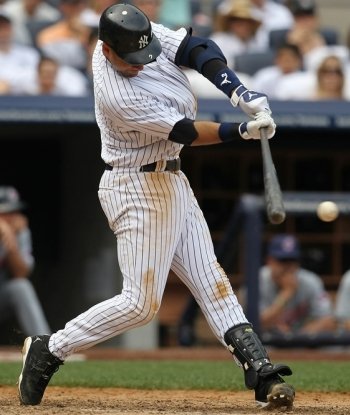 I mentioned Core Stability & Glute Activation.  I want you to do something for me:

Danilo is arching his back and extending his back leg, resulting in his lower back taking on sheer forces.  In the middle, taking a vacation, are his glutes.  To look like Derek Jeter in the Impact and Follow Through photo to the right, Danilo will have to do these TWO corrective exercises 1-2 times daily:

The reps and time can change for younger hitters.  Be sure to let the hips down slowly (4-secs) for each repetition for #2.  After 4-weeks on #1, turn up the heat by doing a Super Plank-Pushup.  Make sure to practice the same rules from the Super Plank.  The key is NO rotation of the pelvis.  You should be able to set a drink of water on the back of the pelvis when doing the movement, without spilling.

FINAL NOTE on Derek Jeter’s swing: we want head-spine alignment, but with a slight angle up and back over the catcher for more repeatable power.  Derek Jeter is more vertical like Tony Gwynn. 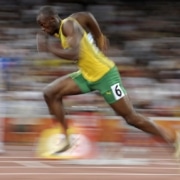 In the Final PART 3 How To Run Faster: Agility Training Video Series, 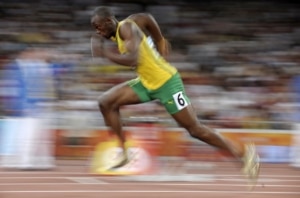 …I bring you on a nickel tour of what I use to hammer speed and agility training into my baseball athletes. In a Step-By-Step breakdown of speed mechanics, here’s some of what Jim Kielbaso and the IYCA covers in the Course:

Just as efficient hitting mechanics can overcome bigger more athletic body types, sprint mechanics can do the same.  Sure speed can be genetic, but it can also be taught and refined.  Jim does a great job in this field.  CLICK HERE to get more information on the Ultimate Speed Mechanics Course. 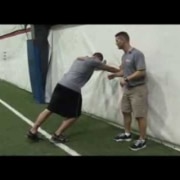 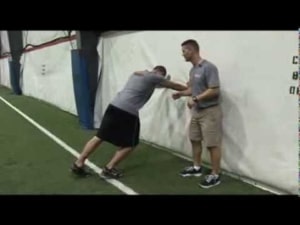 …We’ll go over The Wall Drill, which is actual content INSIDE the course, particularly the:

I get emails from my HPL readers asking about what I use for speed training, and…

With how much time I spend researching hitting and video analysis I don’t have time to scour the net for proper speed training or agility training principals…Jim Kielbaso’s Ultimate Speed Mechanics Course is what I turn to when training my baseball athletes on acceleration and agility on the base paths and 60-yard-dash.  The information he provides is turn-key for any coach or player.

Here’s how to do the wall drill:

STEP 1: Setup
1. Put hands on the wall
2. Feet back behind you
3. Forty-five degree body lean
4. Straight line from shoulders (ears) to ankles
5. Hips forward
6. Chest up

STEP 2: How-To Do The Wall Drill:
1. Lift one knee at a time
2. Bottom of lifted foot faces backwards
3. Lifted toe up (dorsiflexed)
4. Switch your feet, driving the next foot down and back
5. Feel like you’re trying to push the wall in

CLICK HERE for PART 3 of how-to run faster: speed training & agility training as we take a tour of what’s actually inside the course… 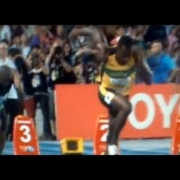 In The PART-1 How To Run Faster Video, You’ll Learn: 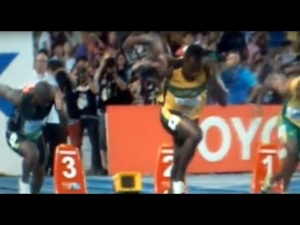 *Jim Kielbaso was brought on to teach the University of Kentucky Basketball team speed training and agility training before their National Championship season in 2012.

I’ve received quite a few emails about how to run faster…I’m not a “speed expert”, but I look to those who are and Jim Kielbaso’s Ultimate Speed Mechanics Course is it.  Mechanics is everything, and Jim backs all his stuff with REAL science.

Have you ever wondered what it is that separates the fastest, most agile athletes from all the rest?

While there are literally thousands of how-to run faster programs out there designed to get athletes bigger, stronger, and more powerful, very few of them are able to teach you how to lay a solid speed training and agility training foundation from which they can build upon.

With the Ultimate Speed Mechanics Course, you finally have a tool that will help develop the fundamental movement skills your athletes need in order to develop them into the quickest and most agile athletes they can be!

Check out PART 2 on how-to run faster: speed training & agility training as we look at one of the best drills for practicing what Jim talked about in this video…

I use the system to teach my son and he is 4’11 67 pound 10 year old. Meaning he is super skinny and very tall. He hit one in tryouts yester… END_OF_DOCUMENT_TOKEN_TO_BE_REPLACED

Thank you so much for your help through your book T.C.L.S. I am 13 and weigh around 105 and I finally hit my first home-run! (The field I wa… END_OF_DOCUMENT_TOKEN_TO_BE_REPLACED

“I bought into this two years ago and bought the book. I coach Fastpitch travel softball. From top to bottom of our batting order pitchers h… END_OF_DOCUMENT_TOKEN_TO_BE_REPLACED

“Hi Coach, I’ve bought two copies (CLS book), one for me and one for my grandson’s coach. I also have three of your online programs.  Des… END_OF_DOCUMENT_TOKEN_TO_BE_REPLACED

Screw those coaches. I didn’t believe the time frame of the catapult system. My son at 10 (90 lbs) is highly coach-able. I taught him the sy… END_OF_DOCUMENT_TOKEN_TO_BE_REPLACED

I’ve gotten the oldest 3 “professional” instruction with their swing mechanics and approach with mixed results. Often times, Id have to spen… END_OF_DOCUMENT_TOKEN_TO_BE_REPLACED

Hey bud…Jayden had his best batting practice ever last night.  Hit at least 9 balls around 300-feet or farther.  I’m so happy with his progr… END_OF_DOCUMENT_TOKEN_TO_BE_REPLACED

I read the first edition of The Catapult Loading System a couple years ago. The only reason I did is because I have a Kindle Unlimited membe… END_OF_DOCUMENT_TOKEN_TO_BE_REPLACED